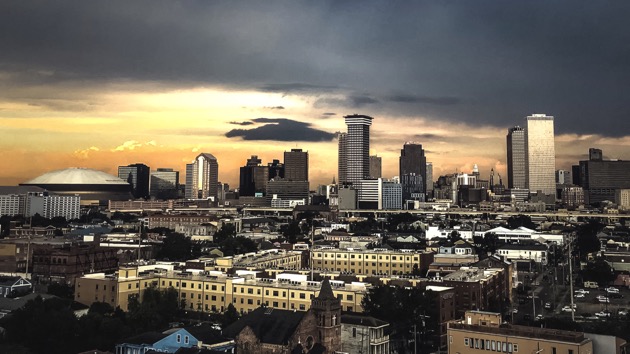 (NEW ORLEANS) — Ida, which downgraded from a hurricane to a tropical depression Tuesday, battered Louisiana as a fierce Category 4 storm Sunday, leaving whole towns flooded along the coast and New Orleans still entirely in the dark.

Over 884,000 customers remain without power in Louisiana and over 14,000 remain without power in Mississippi as of Wednesday morning, according to a report from the Cybersecurity and Infrastructure Security Agency (CISA) obtained by ABC News. Entergy wrote on Twitter that it took the first step to restore power back to New Orleans East, and the first light shined. “Crews will have to methodically bring back additional transmission lines over time to provide additional pathways for progress,” they said.

FEMA reported four Louisiana hospitals were damaged due to the storm, 39 medical facilities had to start operating on generator power and many patients were evacuated. Also, several buildings in Port Fourchon — which is is responsible for 18% of the U.S. oil supply — sustained severe damage.

New Orleans Mayor LaToya Cantrell said during a news conference Tuesday evening that the city will see “some level of transmission” of power as early as Wednesday evening.

“The expectation should not be … that the entire city will be lit on tomorrow evening, but in stages,” she said.

As of Wednesday, the city’s Louis Armstrong International Airport is operating using generator power, and airlines have reported 197 cancellations for Wednesday, according to CISA’s report.

Cantrell said a curfew will go into effect at 8 p.m. local time and last until 6 a.m. Wednesday. Local and state police and the National Guard will patrol the streets, according to New Orleans Police Chief Shaun Ferguson.

The mayor called the curfew a “proactive” measure since there already have been arrests for looting.

Ferguson declined to give more details about those arrests to prevent “a false narrative about this city.”

As of Wednesday morning, Washington, D.C., is under tornado watch and a flash flood warning has been issued for parts of Virginia.

Ida appears to be less lethal than Katrina, which hit as a Category 3, claimed more than 1,800 lives and caused more than $100 billion in damage.

So far, three deaths have been attributed to Ida: a 60-year-old man in Ascension Parish died Sunday when a tree fell on a home, a motorist drowned in New Orleans and a third person died in Jefferson Parish.

In Mississippi, two people died and at least 10 others were injured when a part of a highway near Lucedale gave out and sent vehicles plunging into a hole. Mississippi Highway Patrol Cp. Cal Robertson said the inundating rain may have caused the collapse.

The storm dumped up to 15 inches of rain in some places, like Rigolets-Slidell, Louisiana, and 13 inches in New Orleans. Ida also brought powerful winds gusts of over 100 mph in some regions.

Ida also knocked out power to more than 1 million homes and businesses in Louisiana and Mississippi — including all of New Orleans — and temporarily halted the city’s 911 emergency response system.

Officials in Jefferson Parish, home to 400,000 residents, warned it could be 21 days before power is restored.

Communities reeling from the destruction are now stranded without water. Some 18 water system outages have impacted over 312,000 customers and 14 boil water advisories are in place impacting over 329,000 people, Louisiana Gov. John Bel Edwards said in a press conference Monday evening.

Heat advisories are active in parts of Louisiana, threatening communities grappling with no electricity or access to air conditioning. The National Weather Service issued a heat advisory for southern Louisiana and Mississippi from 10 a.m. to 5 p.m. Tuesday.

Another element Katrina didn’t have is the COVID-19 crisis. Some Louisiana hospitals pushed to the brink with an influx of coronavirus cases were forced to evacuate due to physical damage, water and electrical issues.

The Louisiana Department of Health told ABC News at least 11 hospitals had evacuations on some level and Terrebone General Health System’s evacuation is still underway.

The state fire marshal office’s leading task force of about 900 individuals from 15 different states is conducting search and rescue missions with local responders. Some 5,000 National Guard members are also on the ground.

Edwards said at least 671 were rescued by Monday afternoon, with some desperate locals fleeing to their attics or roofs to wait for help.

Over 2,200 evacuees are staying in 41 shelters, Edwards said.

Jaclyn Hotard, the president of St. John the Baptist Parish, called Ida, “one of the worst natural disasters I’ve ever seen in St. John,” noting that “almost 800 people” have been rescued due to extreme flooding.

Entergy New Orleans, a major electricity company in the region, said a storm team of more than 20,000 and growing is assessing the vast damage and destruction across New Orleans and southeast Louisiana that toppled power poles and other equipment.

Ida, now a tropical depression, is centered on the border of Missouri and Tennessee and threatens to bring deadly flash flooding to the Gulf coast overnight as it continues to move north and east. Almost 80 million in 17 states are on flash flood alert from Mississippi to Massachusetts.