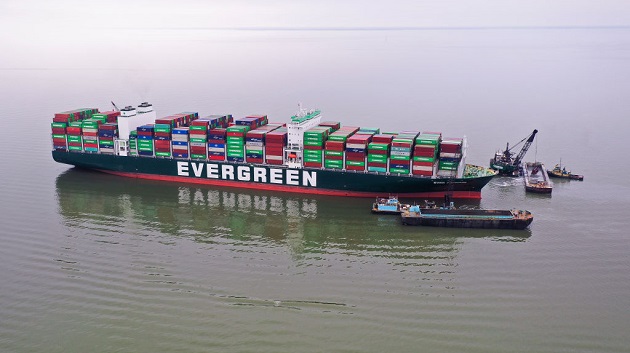 (WASHINGTON) — Following two failed attempts, a new effort got underway on Wednesday to dislodge a 130-ton, fully-loaded cargo ship that has been mired in the mud of the Chesapeake Bay in Maryland for more than three weeks.

U.S. Coast Guard officials said two large cranes and two barges were being moved to where the Ever Forward container ship ran aground in shallow water and crews are expected to begin off-loading a portion of the 5,000 cargo containers aboard, hoping that will give the vessel the buoyancy required to free it.

“They’re still staging the equipment so that they can remove the containers. It’s going to take a few days to get that set up,” Petty Officer Cynthia Oldham, a spokesperson for the Coast Guard, told ABC News on Wednesday afternoon.

She said once the cranes and barges are in place, crews could start removing containers by this weekend or early next week.

“Hopefully, it’s going to be wrapped up around April 15, but that, of course, is dependent on a lot of different variables,” Oldham said.

The 1,095-foot ship belongs to Evergreen Marine Corp., the same company that owns the Ever Given cargo ship that got stuck in Egypt’s Suez Canal in March 2021, blocking the world-famous waterway for six days and causing massive delays in global shipping.

The Coast Guard said the Ever Forward is stranded in mud in about 23 feet of water off Downs Park in Pasadena, Maryland, about 20 miles south of Baltimore. The ship is outside of the deep-water shipping channel so it’s not blocking boat traffic on the Chesapeake Bay.

“The ship is grounded from bow to stern,” Oldham said.

Two previous attempts to free the vessel were not successful. Crews tried to move the ship with multiple tugboats, but it wouldn’t budge. Crews have also dredged around the hull of the big boat, but that effort was in vain, too.

The latest plan calls for removing some of the containers, which weigh 8,000 pounds each empty, from both the starboard and port side to maintain the stability of the ship, Oldham said.

“A few hundred containers are expected to be removed, not all of them,” Oldham said.

The refloating situation has gone so bad that the Evergreen Marine has notified anyone with a container on board that they will need to share in the cost of freeing the ship under the law of general average, a principal of maritime law dating back to 1890.

“Evergreen Line urges all cargo interests involved, and joint venture slot users to provide security bonds and necessary documents according to the adjusting rules that govern GA in order to take delivery of cargo after the vessel is freed and arrives at its future ports of discharge,” the company said in a statement released this week.

John Martino of the Annapolis School of Seamanship told ABC affiliate station WMAR in Baltimore that the new plan to free the ship is fraught with danger.

“They have to be careful the order they take the containers off,” said Martino, who visited the ship on Tuesday. “So, they have to make sure everything stays balanced as they go along.”

As a precaution, the Coast Guard is only allowing the work to unload the vessel to occur during daylight hours.

The container vessel ran aground March 13 after leaving the Seagirt marine terminal in Baltimore. The Hong Kong-flagged ship was headed to Norfolk, Virginia, when the mishap occurred.

There were no reports of injuries or damage to the ship or its cargo.

Following the incident, Evergreen immediately activated its emergency response plan and appointed a salvor to conduct underwater inspections of the ship and come up with refloating plan.

Evergreen reported that an inspection showed that no fuel or pollution have leaked from the ship into the Chesapeake Bay.