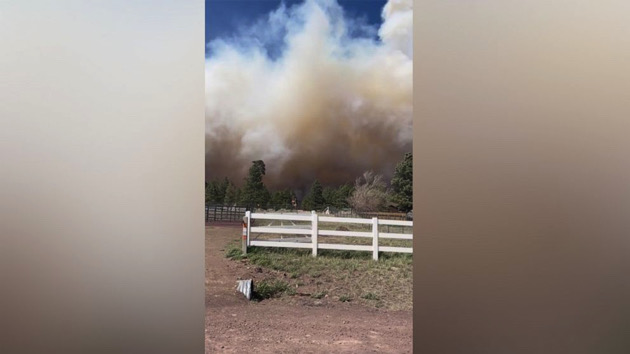 (FLAGSTAFF, Ariz.) — Dangerous fire conditions are creating the perfect fuel for wildfires to scorch through the arid landscapes of the Southwest.

The Tunnel Fire, which sparked Sunday about 14 miles northeast of Flagstaff, Arizona, exploded to more than 16,000 acres by Wednesday morning, destroying at least 25 structures, according to Coconino County officials. More than 200 firefighters are battling the fast-moving inferno, which is currently 0% contained.

An additional 250 structures are threatened, which has prompted evacuations of nearly 800 homes and 1,000 animals in the area. While the Red Cross has opened a shelter at a local middle school, the Fort Tuthill County Stables has been opened for horses, goats, sheep, pigs and chickens that reside in the evacuation zone, according to the county.

A red flag warning has been canceled in Arizona due to relaxing winds but remains in five neighboring states from Nebraska to New Mexico.

Videos taken in the region show skies covered in orange flames and thick plumes of smoke as the blaze continues to gain traction and spread. Some flames are reaching up to 100 feet, according to officials.

A decades-long megadrought, combined with low humidity and high winds, has created tinderbox conditions in the area.

The Southwest is experiencing the driest conditions in at least 1,200 years, a study published in Nature Climate Change in February found.

Officials have declared a state of emergency in the area affected by the Tunnel Fire.