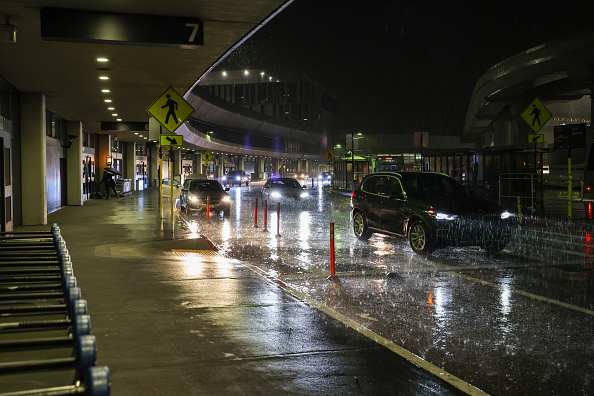 Heavy snow will be falling in Colorado and Utah, with up to 20 inches of snow possible in Utah.

In California, winds gusts up to 132 mph were reported in Alpine Meadows and up to 60 mph at San Francisco International Airport.

Winds in Los Angeles County gusted up to 87 mph and up to 63 mph on the Santa Barbara County coast on Thursday.

Heavy rain fell in California with 5.05 inches falling in Los Angeles County and 6.57 inches falling in Ventura County. Downtown San Francisco also experienced their wettest 10 days since 1871 with 10.33 inches of rain falling in the 10 day period from Dec. 26 through Jan. 4.

Most of California will be getting a short break from heavy rain and snow before another storm arrives this weekend.

With the next storm on the way, heavy rain is expected in the San Francisco Bay area Saturday morning into Saturday night. This rain gets lighter as it moves into Southern California by early Sunday morning.

Another storm arrives into California Sunday evening with more rain. It is expected to impact most of California next week, including San Francisco and Los Angeles.

With these two storms coming, up to 10 inches of rain is possible in some parts of California.

Up to 6 feet of snow is possible in the mountains over the next few days. An avalanche warning was issued for the area.

Elsewhere, a different storm produced 23 reported tornadoes across the South.

Seven tornadoes were confirmed in Illinois alone, making it the biggest tornado outbreak for the state since 1989.

To the north, up to 15 inches of snow fell in the Twin Cities, Minnesota, breaking a daily record and making it the snowiest start to January in five years.

With more than 48 inches of snow so far this season, this is the snowiest start to winter in almost 30 years at Minneapolis−Saint Paul International Airport.