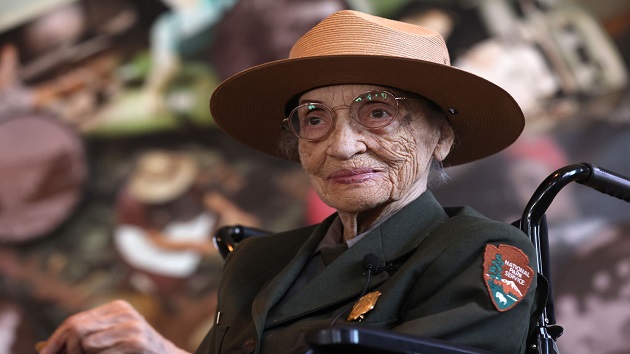 Prior to her retirement just weeks ago, Soskin, at age 100, was the oldest active National Park Ranger serving the United States.

“To be a part of helping to mark the place where that dramatic trajectory of my own life, combined with others of my generation, will influence the future by the footprints we’ve left behind has been incredible,” said Soskin in a prepared statement and announcement from the NPS.

Soskin first joined the NPS in her 80s. In the early 2000s she was actively involved and participated in the planning effort to bring the Rosie the Riveter National Historical Park to the city of Richmond. She’s also credited with working to help uncover untold stories of African Americans on the home front during WWII.

“If we don’t know where we started, we have no conception of where we are or how we got here. Only if we go back and retrace our steps. And that’s what the park became for me,” Soskin said during a speech at the Rosie the Riveter Visitor Education Center, explaining what drove her to get involved with the park’s planning.

It was those efforts that led her to a temporary position with the NPS at age 84, and eventually a permanent role.

For more than a decade-and-a half she had led public programs at the park, providing broader context of the WWII war effort, and the backdrop of racism and segregation through her own life experiences. Her great-grandmother, born in 1846, was a slave until she was 19, freed by the Emancipation Proclamation. Soskin said she was 27 when her slave ancestor died at 102, during her speech.

“The National Park Service is grateful to Ranger Betty for sharing her thoughts and first-person accounts in ways that span across generations,” said Naomi Torres, acting superintendent of Rosie the Riveter/WWII Home Front National Historical Park. “She has used stories of her life on the Home Front, drawing meaning from those experiences in ways that make that history truly impactful for those of us living today.”

Soskin was born in Detroit in 1921 to African American parents. She spent her early years in New Orleans before “The Great Mississippi Flood of 1927” drove her family to relocate West to Oakland, California.

As a young woman during World War II, Soskin worked as a shipyard clerk for an all-Black auxiliary lodge of the segregated Boilermakers union. At the time, the union did not allow people of color and women to become union members.

In 1945, Soskin along with her husband founded one of the first Black-owned music stores, “Reid’s Records,” which shut its doors in 2019.

She would also later get involved in local politics, having served as a Berkeley city council member and as a field representative serving two members of the California State Assembly.

I heard Betty Reid Soskin is retiring at 100, and want to congratulate her for more than a decade of service as a National Park Ranger.

Betty, I hope you realize just how many people appreciate everything you’ve done—myself included. pic.twitter.com/lElFYwxVMg

It’s an experience, that she said, was “probably one of the greatest things I’ve ever done.”

“I was able to introduce the president, on the stage, to all of America,” Soskin recounted to CBS’s San Francisco news station.

On Saturday, the NPS will host a retirement ceremony for Soskin at the Rosie the Riveter WWII Home Front National Historical Park, which will be open to the public.