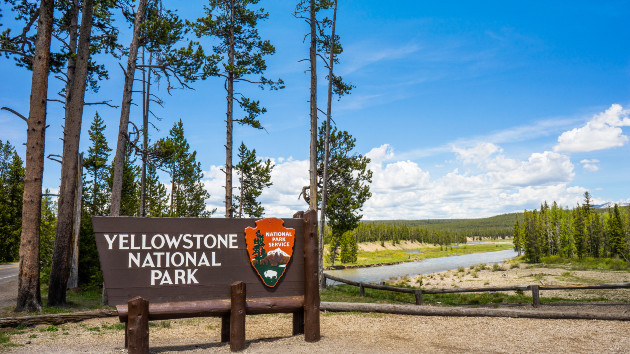 (NEW YORK) — The establishment and enjoyment of the nation’s national parks has become an American pastime a century and a half after Wyoming’s famed Yellowstone National Park was formed.

But the survival of the parks — and the landscapes and ecosystems they house — is precarious as global warming continues and visitors infringe upon the natural settings.

The U.S. was the first country to take note of the abundance of natural wonders and say, “This is something we value as a society, and we want to preserve, and we want to share,” Kathy Kupper, a spokesperson for the National Parks Service, told ABC News. Before the establishment of government-funded land, these spaces were often privately owned and only available to the owner to enjoy, she said.

“It’s very democratic, and its idea of taking our best and opening it up to all citizens in the world to come and take advantage of the inspiration, the education, the recreation available in these public lands,” Kupper said.

National parks are established either by an act of Congress or by a presidential proclamation. While sites have only been decommissioned a few times in history, generally, it is because there has been an impact to the park that has taken away its significance, or it’s been transferred to another entity, such as the state, that will preserve it, Kupper said.

A national and global movement has taken place in the 150 years since Yellowstone was founded in 1872. There are now 423 national parks in the U.S. — with at least one in every state — and hundreds of countries have established national park systems themselves, often using the NPS as an example and sending representatives to the U.S. to learn how to develop and maintain them, Kupper said.

“My favorite thing about the National Park Service and its mission is that it’s very unselfish in its nature,” Riley Mahoney, the founder of The Parks Expert, a travel guide for the national parks, told ABC News. “It was not for monetary gain. It was not for greed, but for future generations.”

This is why preserving national parks is so important:

They are so important for research and education

Climate change and other environmental factors are already affecting the natural landscape of the national parks.

The sequoia trees in the Redwood National Forest are at higher risk than ever before from devastating wildfires. Glaciers and sea ice are deteriorating so quickly at Denali National Park in Alaska that sled dogs are no longer able to complete their long-distance runs. Swamp waters in the Everglades are rising as melting ice causes sea levels to rise all over the world, and Joshua Tree National Park, nestled near the Colorado Desert and the Mojave Desert, will likely lose all of its iconic Joshua Trees by 2070 due to continued megadrought.

The 85 million acres in total of national parks are increasingly subject to the environmental and human impacts that threaten the health of wildlife and their habitats, according to the National Park Foundation. They are also becoming more crucial to understanding the environmental effects as a result of factors such as human encroachment and global warming.

Last year, researchers described U.S. national parks as the world’s “living laboratories” in a study published in the Society for Conservation Biology.

Kupper likened the hundreds of national parks to “the largest university system in the country, with 423 branch campuses.” They “tell the story of America,” she said.

Mahoney agreed, saying each park has a different lesson to impart on its visitors, whether it is to teach them about the importance of national resources to historical monuments such as the Liberty Bell, the Constitution and the Declaration Theater in Philadelphia, she said.

“Whether you like history or geology or volcanoes, there’s so much to learn and be inspired about,” Kupper said. “You can go to the homes of famous inventors or statespeople.”

In addition, the parks serve as teaching tools for one another. Sister parks, such as multiple national parks in Hawaii that contain volcanoes, will often partner to learn from each other and help each other in aspects of protection and conservation, Kupper said.

However, research on the parks, which is crucial for assessing research needs and planning for the future, has not been inventoried at a national scale and focused largely on the ecoregion of the forested mountains in the Northwest, according to the 2021 study.

We are preserving history as well as the future

Unique origin stories are attached to the birth of many of the national parks.

“Every one of the sites has or a really profound story of its importance and why it was established and why it’s part of National Park Service,” Kupper said.

In 1908, five years after visiting the Grand Canyon, President Theodore Roosevelt declared the Grand Canyon a national monument — a power given to him as president as part of the 1906 American Antiquities Act. The reserve’s status as a national park became complete in 1918.

For decades, Sir Lancelot Garfield Jones had resisted efforts from developers in South Florida offering him millions of dollars to turn his family’s land into a vacationer’s paradise. Finally, in 1970, Lancelot and his sister-in-law sold their share of more than 277 acres that would become the Biscayne Bay National Park to the National Park Service for $1.2 million.

“You had somebody who, under intense pressure to make money off his land, refused,” Kupper said. “He saw the value of it and wanted to share with the public and not have it developed.”

The prolific Rockefeller family also had a hand in creating many national parks.

“J.D. Rockefeller actually was a big proponent of national parks and, through his philanthropy, parks like Shenandoah, the Great Smoky Mountains, Grand Teton, Acadia [and] Redwoods were established,” Kupper said. “HIs son, Laurance Rockefeller, continued that tradition with the Virgin Islands National Park and the Marsh-Billings-Rockefeller National Park, where he lived and talked about his conservation efforts.”

There’s something for everyone

One does not have to consider themselves “outdoorsy” to find a national park they enjoy, according to the experts.

In addition, the most-visited national parks are surprisingly those near urban areas, since they are the most accessible, Kupper said.

“They are closer than people might realize,” Kupper said. “You don’t have to plan a week getaway to visit a national park. You could get out for a couple of hours and go to one that’s closer and enjoy the benefits that come with spending time in nature.”

While the Grand Canyon, Yosemite, Yellowstone, Zion and Acadia tend to be the bucket list destinations for many national park enthusiasts, the NPS encourages visitors to consider activities in other regions, such as hiking for six months on the Appalachian Trail, exploring a boardwalk trail to see alligators up close in the Everglades or researching the best places to enjoy some activities like having a picnic, reading a book or go rock climbing or whitewater rafting.

“We always say there’s something for everybody in National Park,” Kupper said. “We have something for really every interest and ability.”

Other areas that have been declared national parks by Congress include historic sites, battlefields, military parks, lakeshores and seashores, she said.

For example, people may flock to the Golden Gate National Park in San Francisco to see the monument for Rosie the Riveter, where they can learn about the history of how women and people of color responded to World War II, rather than go on a physically demanding hike, Mahoney said.

Visitors must take care while marveling at the wonder

The number of visitors to national parks skyrocketed in recent years as the pandemic took hold worldwide and people committed to spending their leisure time outdoors in an effort to avoid spreading the virus.

The benefits to spending time outdoors amid the demands of the modern world is no surprise, Kupper said, adding, “Nature is therapy.”

But while the steady stream of tourists may be good for the surrounding businesses, it could put the very nature they are there to see — as well as themselves — in peril.

Visitors are often feeding the animals, getting too close for a selfie or trying to unnecessarily assist the animals, which are in their natural habitat.

In 2016, a bison calf at Yellowstone was euthanized after visitors thought it looked cold and placed it in the trunk of their car in an effort to help. The bison was later rejected by its herd and would not have survived if placed back in the wild, Kupper said.

“As much as people see animals, and they feel like, they want to feed them, or pet them or take a selfie with them, it might not end well for the visitor, and it really never ends well for the animal,” Kupper said.