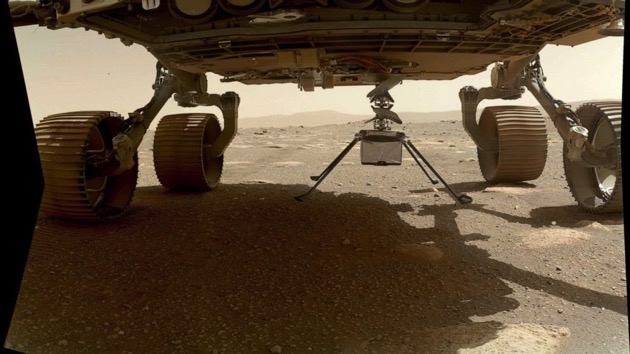 (NEW YORK) — NASA confirmed Monday that its Ingenuity helicopter had survived its first night alone on the frigid surface of Mars, and is now in the final stages of preparation for its history-making liftoff on another planet.

The Ingenuity helicopter officially detached from its position on the belly of the Perseverance rover and touched down on the surface of Mars this past Saturday, the space agency said. Without the rover’s power source, the 4-pound helicopter needs to rely on its own battery and solar panels to stay warm on the surface of Mars, where temperatures at night can drop to as low as -130 degrees Fahrenheit.

The #MarsHelicopter is on its own now, getting ready to take on Mars – one step at a time. https://t.co/Sqd4G8OYWY

“This is the first time that Ingenuity has been on its own on the surface of Mars,” MiMi Aung, the Ingenuity project manager at NASA’s Jet Propulsion Laboratory (JPL), said in a statement Monday. “But we now have confirmation that we have the right insulation, the right heaters, and enough energy in its battery to survive the cold night, which is a big win for the team.”

NASA is now targeting no sooner than this Sunday for Ingenuity’s first flight. If successful, it will become the first powered, controlled flight of an aircraft on another planet.

Ingenuity will collect information about how well its thermal-control and power systems perform over the next few days. On April 7, the restraints that have been holding the rotor blades on the chopper together are scheduled to be released.

Then comes another series of preflight checks to test the rotor blades, motors, onboard computers and more.

“If all goes well with each of the myriad preflight checks, Ingenuity’s first attempt to lift off from the middle of its 33-by-33-foot (10-by-10-meter) ‘airfield’ — chosen for its flatness and lack of obstructions — will be no sooner than the evening of April 11,” JPL said in a statement Monday.

The Ingenuity helicopter does not carry any scientific instruments for its flight, and its sole mission is to conduct test flights in the thin atmosphere of Mars as part of a technology demonstration.

The first test flight is expected to hover at around 10 feet off the ground. The maximum anticipated altitude of Ingenuity during its flight tests is approximately 16 feet, according to JPL.

NASA said subsequent flight tests will be scheduled throughout April, which it dubbed “the Month of Ingenuity.” All of the flight attempts will be documented via high-definition cameras on the Perseverance rover. The cosmic helicopter got its name from a Alabama high school student who won an essay contest last year.

Perseverance, NASA’s most-sophisticated rover yet, which carried Ingenuity to the red planet, landed on Mars in February. The goal of Perseverance is to search for signs of ancient life on Mars, and pave the way for eventual human exploration.