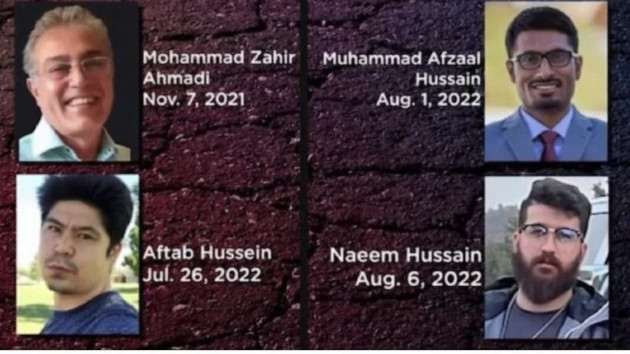 (ALBUQUERQUE, N.M.) — Muslim communities are reeling after the fourth killing in a potential string of murders of Muslim men in Albuquerque, New Mexico.

All the deaths have taken place in just a nine-month period, stoking fear among local faith groups and garnering attention from Muslim leaders nationwide.

The Albuquerque Police Department chief of police announced Tuesday that the Volkswagen sedan believed to be involved in the most recent murder of 25-year-old Pakistan native Naeem Hussain has been tracked down and the driver has been detained.

He is the primary suspect in the murders, according to the APD.

The news comes just after the Council on American-Islamic Relations (CAIR), the nation’s largest Muslim civil rights and advocacy organization, announced a $10,000 reward for information that would lead to the arrest and conviction of those responsible for the deaths.

“The lives of Albuquerque Muslims are in danger. Whoever is responsible for this horrific, hateful shooting spree must be identified and stopped — now,” CAIR National Deputy Director Edward Ahmed Mitchell said in a statement.

Police are investigating whether the killing is connected to the Aug. 1 shooting death of Muhammad Afzaal Hussain, 27, as well as the July 26 murder of Aftab Hussein, 41 — both of whom are also from Pakistan.

The November 2021 murder of Mohammad Ahmadi, a Muslim man from Afghanistan who was killed outside a business he ran with his brother, may also be connected, police say.

The Islamic Center of New Mexico held a memorial Tuesday evening for the four men.

“Our local and national officials continue to work hard in their investigation, and we will continue to remain vigilant,” a press release for the event read. “We are still early in the process of grieving, but we would like to announce a memorial that will take place to raise prayers in remembrance of our four Muslim Brothers, whose lives were violently taken away.”

During a Saturday press conference, Mayor Tim Keller, alongside the group’s president, Ahmad Assed, told reporters that the tragic murders have impacted Muslims throughout the city.

Assed told reporters that his group, alongside local officials, is working to combat these fears.

“We’re hopeful that our state will emerge again as the state we all know, as the warm and diverse [state], the diverse cultures, the welcoming of diverse cultures,” Assed said. “We will defeat hate.”

Local Muslim leaders are looking to law enforcement for safety in response to the murders, as officials increase their presence near Muslim institutions.

Locals say they fear for their safety and are urging one another to take extra precautions, such as traveling in groups, being aware of one’s surroundings and avoiding walking alone at night.

Tahir Gauba, the spokesperson at the Islamic Center of New Mexico, asked police in a University of New Mexico safety forum to sit down with Pakistani students and speak with them about their fears and concerns.

“There were at least four or five students — international Pakistani students — who have left our town because they were concerned for their safety,” Gauba told police during the call.

The APD asked the Muslim community on Saturday to “be vigilant” and report anything suspicious to law enforcement officials.

“This tragedy is impacting not only the Muslim community — but all Americans,” CAIR National Executive Director Nihad Awad said in a statement. “We must be united against hate and violence regardless of the race, faith or background of the victims or the perpetrators. We urge anyone with information about these crimes to come forward by contacting law enforcement.”