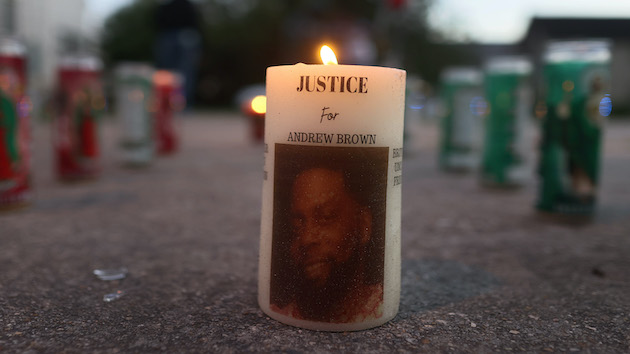 (NEW YORK) — Amid ongoing protests over the fatal shooting of Andrew Brown Jr. by North Carolina sheriff’s deputies, loved ones and supporters of the 42-year-old Black man are expected to march on Sunday afternoon to a museum for a public viewing of his body and memorial service.

The memorial service and public viewing for Brown, who died in a hail of gunfire outside his home on April 21, is scheduled to be held from 3 p.m. to 6 p.m. at the Museum of the Albemarle in Elizabeth City, North Carolina.

The Rev. Greg Drumwright, a civil rights activist in Elizabeth City, said he will lead Brown’s family on a march to the memorial service.

Brown’s invitation-only funeral service is scheduled to be held at noon Monday at the Fountain of Life Church in Elizabeth City.

Relatives and friends of Brown, a father of seven, gathered earlier Sunday at Horton’s Funeral Home and Cremations Chapel for a private viewing.

Sunday marks the 11th straight day of mostly peaceful protests over the death of Brown in Elizabeth City, where the mayor has imposed a nightly curfew and declared a state of emergency over fears the demonstrations could turn violent.

Protesters have joined Brown’s family in calling on the Pasquotank County Sheriff’s Department to publicly release all video it has of the shooting, including body camera and patrol car dashcam footage.

Brown’s son, Khalil Ferebee, other family members and one of their lawyers were allowed to view a 20-second body camera clip of the shooting last week at the Pasquotank County Sheriff’s Department. Ferebee said the video showed his father being “executed” as he tried to drive away from his home as deputies opened fire on him.

An independent autopsy commissioned by the family showed Brown was shot five times in the incident, including a fatal shot that hit him in the back of his head at the base of his neck, attorneys for the family said at a news conference last week.

During a court hearing on Wednesday, Pasquotank County Superior Court Judge Jeff Foster rejected a request from the local sheriff and multiple media outlets to immediately release the body camera videos that show sheriff’s deputies fatally shooting Brown. The ruling came after Pasquotank County District Attorney Andrew Womble told Foster that the release of the video now could jeopardize an investigation of the shooting by the North Carolina State Bureau of Investigation.

While Brown was unarmed when he was shot, Womble said during the court hearing that Brown’s car drove toward law enforcement officers and allegedly made contact with deputies twice before shots could be heard on the the video footage of the shooting.

The shooting unfolded around 8:30 a.m. on April 21 when deputies from Pasquotank and Dare counties went to Brown’s home to attempt to serve an arrest warrant on Brown that stemmed from a felony drug investigation, officials said.

Pasquotank County Sheriff Tommy Wooten on Thursday identified the three deputies who fired shots at Brown as Investigator Daniel Meads, Deputy Sheriff II Robert Morgan and Cpl. Aaron Lewellyn. Wooten said the three deputies remain on leave, while the four others who didn’t fire their weapons in the incident were reinstated to active duty.