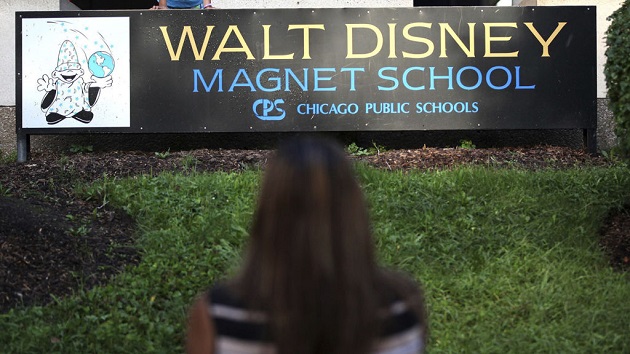 (CHICAGO) — The mother of a Chicago student faces child endangerment charges after the student brought a loaded gun to school in a backpack and the weapon accidentally discharged, police said.

The incident occurred at Walt Disney Magnet School on the city’s North Side shortly before 10 a.m. Tuesday, according to the Chicago Police Department.

“The weapon accidentally discharged in the backpack while inside a classroom, with a bullet striking the ground and ricocheting, resulting in a classmate being grazed in the abdomen,” the department said in a statement.

The classmate was taken to a local hospital in “good condition,” the department said. Information on the ages of the students involved was not given.

Her attorney, Rodger Clarke, argued that Kelly had no criminal record and that this was a “one-time incident, not soon to be repeated,” according to the Chicago Sun-Times.

In a letter obtained by WLS that was sent to parents on Tuesday, the school’s principal, Paul Riskus, addressed the incident.

“This morning during school hours, a gun was accidentally discharged on school grounds,” he wrote. “The gun discharged in a backpack and hit the floor, causing some damage and releasing debris.”

Riskus said no one was “seriously injured” and that school staff secured the gun and contacted police and and the Chicago Public Schools’ Office of Safety and Security. Police confiscated the weapon.

“We are working closely with the CPS Office of Safety and Security to make a safety plan moving forward,” he wrote. “Please know that we are taking this situation extremely seriously, and CPD is investigating this incident.”

Worried family members of students who attend the school rushed to the campus in the wake of Tuesday’s incident.

“All I heard was there was a gun and I came flying,” Jennifer Uribe, whose daughter texted her about the incident, told WLS. “I wasn’t going to text her because if she had to hide, I didn’t want her doing that. So I said, ‘Stop texting me’ and I came here.”

Edwina Watkins, whose 12-year-old grandson attends the school, told WLS she was shocked.

“It is shocking for one, for a little kid to have a gun, something that should be hard for an adult to have at a school,” Watkins said.

Victor Garcia, whose son is in pre-K, told WLS he was “freaking out.”

“Gun shootings going all over the country,” he said. “This is crazy.”