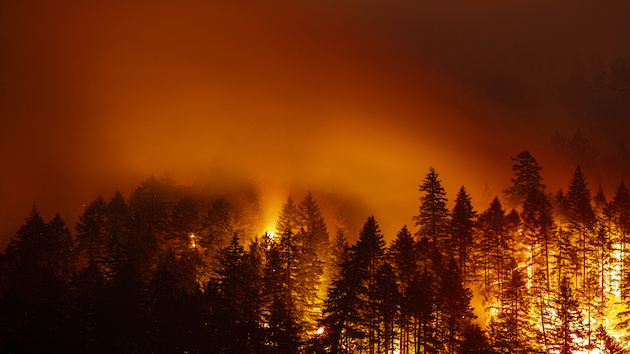 (SAN FRANCISCO) — Fire conditions in the West are worsening this week, increasing the possibility of more blazes.

Currently, 90 large wildfires are burning in 12 states in the West — at least 35 of which ignited over the weekend due to lightning strikes.

Another heat wave is blanketing the region as moisture from the monsoons in the Southwest move away, leaving behind a dry atmosphere and tinderbox conditions. Heat advisories and excessive heat watches have been issued from Oregon to Arizona, with temperatures expected to surpass 100 degrees again.

The McFarland Fire in Wildwood, California, has prompted evacuations in the area after it grew to more than 2,100 acres and remains just 5% contained.

The Dixie Fire near the Feather River Canyon in Northern California, the largest in the state so far this year, is now at 248,000 acres. Firefighters were able to halt the blaze’s progression, which is now 33% contained, but some evacuation orders remain in place.

Firefighters in Oregon have made progress against the Bootleg Fire, the largest in the country, with 84% containment after it grew to nearly 414,000 acres, the third-largest wildfire in state history.

However, red flag warnings have been issued in Southern Oregon over the possibility that more fires will spark due to dry lightning. Hot, breezy conditions are expected to persist this week.

Above-normal significant fire potential is expected to continue in the Northwest, northern Rockies and northern portions of the Great Basin, according to the National Interagency Coordination Center’s National Fire Significant Wildland Fire Potential Outlook for August through November.

Despite monsoon conditions in the Southwest last week, “exceptional drought” conditions are persisting across Northern California and the Northwest, according to the U.S. Drought Monitor.

The Bud Billiken Parade through the years