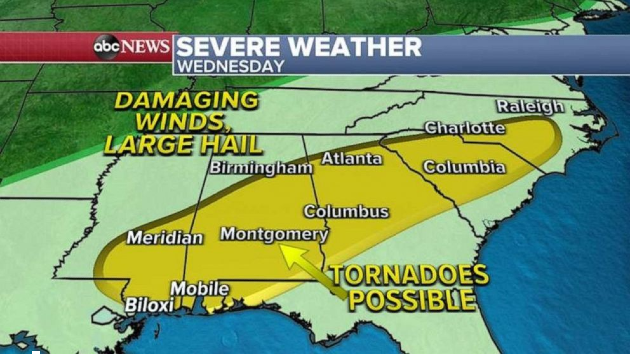 (NEW YORK) — A large storm system is moving east across the U.S., with tornadoes and flash flooding expected in the South and a wintry blast to the north.

There were two reported tornadoes Tuesday in Mississippi and numerous damaging storm reports across the South from straight-line winds.

Locally, more than 4 inches of rain fell in Tennessee overnight. A flash flood warning has been issued for the area.

There are several watches and warnings Wednesday as this storm moves through from the Plains and into the Northeast.

Severe weather is expected from Mississippi to North Carolina Wednesday, but the biggest threat for tornadoes will be in Alabama.

These severe storms could produce damaging straight-line winds from Georgia to North Carolina.

To the north, a winter-like air mass is moving in with snow expected for parts of the Northeast Wednesday night into Thursday morning.

Winter storm watches and warnings have been issued for Pennsylvania, New York and Vermont. Locally, more than 10 inches of snow is possible by April 1.

Behind this storm system, it’s very cold for late March and early April.

Wind chills Wednesday morning are running in the teens and single digits in the northern Plains and the Great Lakes.

A freeze warning has been issued as far south as Arkansas and Kentucky.

This cold air mass will move east into the Northeast by Thursday night into Friday morning.

On Friday morning, wind chills will be in the teens and 20s for the I-95 corridor.