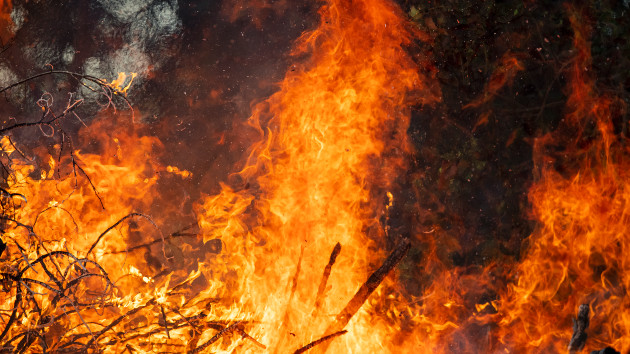 (NEW YORK) — Several wildfires are continuing to wreak havoc on landscapes all over the Western U.S. despite winds that have lowered the chances of rapid spread.

Most of the fires are burning in Texas, New Mexico and Arizona, regions plagued with dangerous fire conditions, which have allowed the wildfires to explode as soon as they sparked.

In New Mexico, the Calf Canyon Fire and the Hermits Peak Fire merged, burning through more than 54,000 acres east of Santa Fe by Monday morning, officials said. That inferno is only 13% contained and has prompted widespread evacuations in the area.

The Cooks Peak Fire in northern New Mexico is the largest at nearly 52,000 acres and is 9% contained, according to officials. While evacuations have been lifted for the Tunnel Fire in Coconino County, it is still only 15% contained and had scorched more than 21,000 acres since it sparked on April 17.

The Crooks Fire, which has burned through nearly 4,000 acres south of Prescott, Arizona, is 22% contained, according to fire officials.

In Nebraska, one person was killed in Red Willow County and three firefighters were injured while attempting to mitigate fires spreading across 12 counties, according to the state’s emergency management agency. Earlier this month, an elderly couple was killed in their Ruidoso, New Mexico, home after they did not evacuate from the McBride Fire in time.

While less wind and cooler weather should slow the spread of the fire, persistent drought conditions in the area has left the region bone dry, allowing the fire to spread through thirsty brush on the ground.

However, relative humidity remains in the single digits in some areas, and fire weather watches will resume on Tuesday due to gusty winds.

Arizona Gov. Doug Ducey and New Mexico Gov. Michelle Lujan Grisham have both declared a state of emergency due to severe wildfire activity.

Many places in the West have been experiencing drought conditions for three consecutive years without any significant recovery in sight, according to the National Oceanic and Atmospheric Administration.

Megadrought conditions in the West are expected to intensify and expand east, which will worsen the likelihood of megafires in the region, officials say.