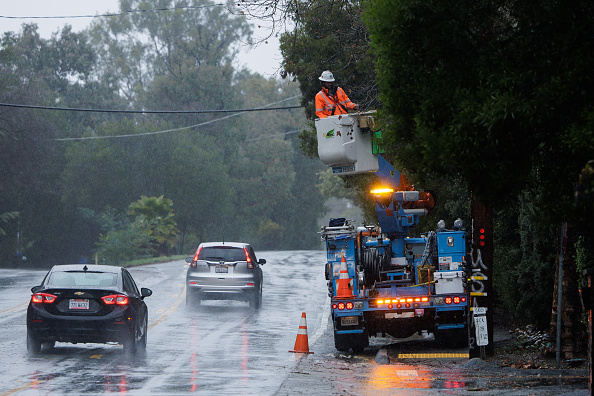 (LOS ANGELES) — With more than 15 million people across California under flood alerts, heavy rain will return to the state on Saturday after an overnight pause.

Over 33,000 customers across California are without power as the state continues to be walloped by an ongoing atmospheric river. The state’s coastal cities of Aptos and Capitola continue to deal with significant impacts from multiple rounds of rain and coastal flooding. Coastal roads have been partially washed away with many businesses and homes flooded.

Another break in the rain will occur during the day Sunday before much of California is slammed by heavy rain overnight Sunday throughout the day Monday.

Even Los Angeles and Coastal Southern California will see the potential for up to 6 inches of rain throughout the next week.

Wind alerts are in effect for over 15 million people with winds expected to gust upwards of 60 miles per hour along parts of coastal Northern California later Saturday.

While much of California has been walloped by abnormally significant rainfall, higher elevations are being buried in snow. Winter storm alerts are in effect across four states from Washington to Colorado Saturday morning. More than 30 inches of snow have fallen over the past 24 hours in the area south of Lake Tahoe with multiple feet of snow still possible.

A large swath of the Sierra Nevada Mountains will see as much as 5 feet over the next seven days, especially south of Lake Tahoe.

Parts of Utah and Colorado picked up notable snowfall totals on Friday as the same system that impacted California earlier in the week moved into the Rockies.

As much as 22 inches of snow were reported south of Salt Lake City while more than 6 inches fell near Grand Junction, Colorado. While not as much as California, up to a foot of snow is still to come in these areas, which will add to their already impressive snowpack of the 2022-2023 winter season.