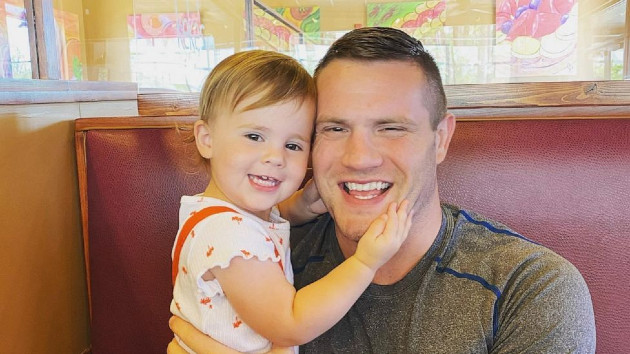 (JACKSONVILLE BEACH, Fla.) — It’s been three months since her husband was murdered, but Kirsten Bridegan has very few answers as to what happened that night.

Jared Bridegan, 33, was shot and killed on Feb. 16 in Jacksonville Beach, Florida, when he stopped his car while driving home after dropping off his 9-year-old twins with his ex-wife.

Kirsten Bridegan believes he stopped the car when he saw a tire in the middle of the road and, rather than drive around, he got out to investigate. Their 2-year-old daughter, Bexley, was in the back seat.

“Jared’s the kind of guy who would stop and move it so others wouldn’t worry about it,” she told ABC News.

The former Microsoft senior manager and father of four was shot, possibly three or four times, Kirsten Bridegan said, in what she described as a targeted attack on Sanctuary Boulevard.

“I don’t buy into the theory that it was random,” she said. “Somebody knew his route. They thought maybe he would be alone … They didn’t fully realize there might be a child.”

“I believe he was the target. Some coward trapped him and took him out and that’s not OK,” she said.

Since Jared Bridegan’s murder in February, First Coast Crime Stoppers has doubled its initial reward to $50,000 for any tips that lead to an arrest, and the Bureau of Alcohol, Tobacco, Firearms and Explosives has offered $5,000 for information that leads to an arrest and conviction.

Police are investigating a vehicle of interest believed to be a dark-colored, likely blue, Ford F-150 truck dated between 2004 and 2008 in connection to Jared Bridegan’s murder. They are also asking if residents know anything about a damaged tire, which they say might be related to the case.

The department is working on the case and pursuing leads, as well as waiting for results from forensic testing, Tator said.

In the wake of her best friend’s murder, Kirsten Bridegan said, some days are better than others.

She described her husband as a creative, fun and loving father who would do anything for his four kids — his twins, Abby and Liam, Bexley and the couple’s eight-month-old daughter, London, who was home with Kirsten at the time of the murder.

“He loved being a dad. He genuinely did,” she told ABC News. “He would spend hours setting up some activity that he thought would be awesome.”

From baking competitions and obstacle courses, to laser tag and their tradition of making toothpick boats to float outside in the rain, “he really went above and beyond to make memories and bond with his kids,” she said.

Now, he won’t get to see his four children grow up; he won’t see London crawl and eventually walk, and he won’t see any of his kids get married, Kirsten Bridegan said.

While nothing will make up for what someone did to her husband, she hopes “they will be remorseful and apologize, and that might mean something to his kids as they grow up,” Kirsten Bridegan said. “I’m fighting hard for Jared and all four of his children so they will have answers and justice, and know why someone took their father away so young.”

“I think it’s a start to find the person or persons behind this and have them pay some earthly justice for what they did,” she added.

Now, she is asking the public for help by asking for people to keep an eye our for the truck and to share her husband’s story.

“The more we know, the more eyes we have, that’s what we need help with. It’s been three months, they could have disappeared,” she said. “The further we get this spread, the better.”

Kirsten Bridegan has created Instagram and TikTok accounts to spread the word about her husband’s murder and to help collect tips.

Anyone with information can contact First Coast Crime Stoppers at 1-866-845-TIPS (8477) or visit the FCCS website, and they can also call the Jacksonville Beach Police Department at 904-270-1667.