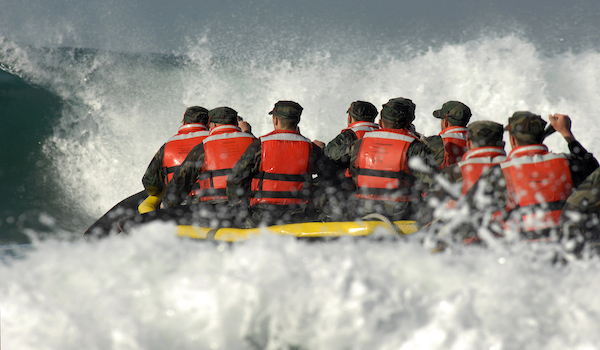 (NEW YORK) — Nearly two months after the unexplained death of Navy SEAL candidate Kyle Mullen, his mother broke her silence, saying she wants to prevent another family from experiencing the same type of tragedy.

“I wake up every night thinking of him, thinking of how he died probably not breathing,” Regina Mullen said on ABC’s “Good Morning America.”

The 24-year-old former football player from New Jersey had just completed “hell week,” a grueling 5 1/2 sleepless days of underwater and tactical training designed to push seal candidates to their physical and mental limits. Those who drop out during hell week or “ring the bell” have to wait two years to try again. But Kyle Mullen made it through and texted his mom to let her know of his success.

She texted her son again immediately after the call, worried about his condition, but she never reached him or spoke to him again.

As a mother and a nurse, she said she knew something was off when she last talked to her son.

“It was just his breathing. He could — it was difficult for him to form the words with the airflow. It sounded labored. He couldn’t breathe properly.”

The day after Kyle Mullen’s death, Navy officials arrived at Regina Mullen’s house, a dreaded sight for anyone with family in the military.

At the time of his death, the Navy released a statement saying Kyle Mullen and another sailor had “reported symptoms” and were taken to the hospital. The other sailor recovered. Kyle Mullen’s death is now under investigation and no official cause has been released.

Regina Mullen believes her son was abandoned when he was most in need.

“I believe…they laid him flat, and he had SIPE, and he most likely couldn’t breathe, and he probably suffocated from his own bodily fluids.

SIPE stands for swimming induced pulmonary edema, fluid buildup in the lungs without choking on water. The majority of cases clear up within 48 hours, but in rare instances, it can be deadly.

Regina Mullen said her son had been treated for SIPE during training in January. Later that month during “hell week,” NCIS investigators told her he was treated with oxygen twice, including on the day he died.

“My son was telling me that it’s discouraged to say, ‘I need to go to the medical.’ He said..they wouldn’t let him go [to] the medical unless you quit and ring the bell,” Regina Mullen said.

She added that when she flew out to California after her son’s death, a commander told her that he had twice been offered medical treatment but refused it.

“At that point, I said, ‘He doesn’t know what day of the week it is. He hasn’t slept in five days. How can he make that determination?"”

The Naval Special Warfare Command told ABC News in a statement that “all candidates receive head-to-toe medical evaluations, including a full set of core vitals, a minimum of once a day and as required throughout the week, as well as upon conclusion of the assessment event.”

Regina Mullen said she hopes no family has to experience what she has gone through and believes was preventable.

Family attorney Ryan Andrews agreed that her son didn’t have to die.

“He just needed someone to care about his condition when he came off before he went to go lay down and go to sleep,” he said. “That’s it. A medical professional with a stethoscope could’ve prevented this.”

The last Navy SEAL candidate to die during this training was 21-year-old Seaman James Lovelace, who drowned in a pool during his first week in May 2016. After his drowning, the Navy instituted additional safety protocols to the swimming program.

“SEAL training takes you beyond your personal limits,” said Eric Oehlerich, a retired SEAL and ABC News contributor. “It’s designed to push you beyond your perception of what’s possible, breaking glass ceilings of what you’re capable of both mentally and physically.”

Oehlerich said he believes the difficult training for prospective SEALs is carried out within proven medical boundaries and run by highly trained professional instructors, but he acknowledged that there are risks involved in all types of military training.

“From time to time training fatalities do occur. Although tragic, adhering to the training curriculum keeps SEALs alive in combat,” he said. “It’s necessary; it can’t be diluted.”

But Kevin Uniglicht, a family attorney for the Mullen family, took a different view.

“We’ve heard it many times, ‘No one left behind,"” he said. “And I think, unfortunately, you know, Kyle was left behind in this situation.”