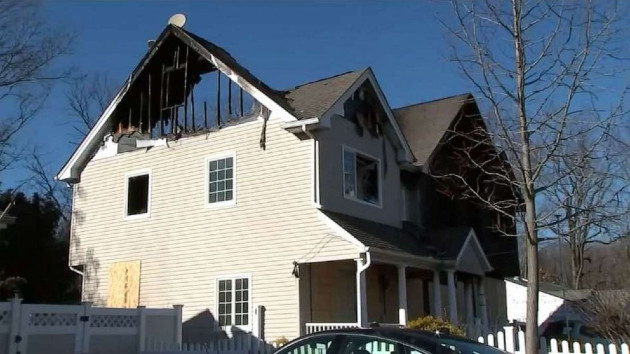 (NEW YORK) — A mother has died after rushing back into her burning home in an attempt to rescue her 6-year-old daughter stuck inside who also ended up dying in the fire.

The incident occurred at approximately 12:30 a.m. on Saturday morning, according to ABC News’ New York City station WABC-TV, when flames began to envelop a single family home in Hazlet, New Jersey, that housed the Montanaro family.

William Montonaro, along with his 40-year-old wife, Jackie Montanaro, their two daughters — 8-year-old Elena and 6-year-old Madelyn — and their Goldendoodle named Duchess were all sleeping inside their home approximately 40 miles south of New York City when the fire erupted.

William, Jackie and Elena were able to escape from the burning home but when the Montonaros realized that Madelyn was nowhere to be seen, both parents rushed back into the house in an attempt to save her from the burning building.

Neither Jackie nor her daughter Madelyn made it out alive.

“Jackie was a hero,” William Montonaro said in a statement obtained by WABC. “When I rushed back into the house for Madelyn I became enveloped with a massive amount of thick, hot black smoke. Without hesitation, Jackie then charged in with a mother’s love and the courage of a police officer fueling her attempt to save our daughter.”

The family’s dog, Duchess, also died in the fire.

“I am heartbroken. I have lost the love of my life – my beautiful wife, Jackie – and my sweet, loving, spunky little girl, Madelyn,” Montanaro’s statement read. “We are extremely devastated Duchess is no longer with us, but we must remember she is now at rest alongside Jackie and Madelyn.”

A GoFundMe page for the family has already raised over a quarter-of-a-million dollars in just a few days with nearly 3,500 people donating in support of the family so far, according to WABC.

“This township is like a family and when a neighbor is hurting, a family member is hurting,” Hazlet Deputy Mayor Peter Terranova told WABC in an interview following the tragedy. “We’ve been overwhelmed by the amount of support.”

Terranova said the family was “very popular in town” and “very helpful, [a] very community-knit family and we are all grieving. It is a tremendous loss.”

The Monmouth County Prosecutor’s Office told WABC that the fire does not appear to be suspicious in nature though the cause of the fire has not yet been determined.

Funeral arrangements have now been made for Jackie and Madelyn Montanaro with viewings for the two taking place on Wednesday and Thursday before they will both be laid to rest following their funeral service at St. Benedict R.C. Church in Holmdel, New Jersey, this Friday. A candlelight vigil for the family will take place at Hazlet Town Hall on Tuesday evening.