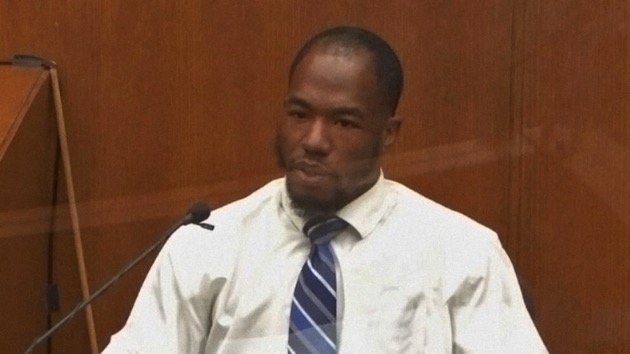 (MINNEAPOLIS) — A professional mixed martial arts fighter who testified in graphic detail about seeing George Floyd’s life being squeezed out of him by a “blood choke,” will return to the witness stand on Tuesday, presenting the defense with what legal experts say is an uphill battle to discredit him.

Donald Williams II — a 5-foot-6, 135 pound bantamweight who fights under the nickname ‘DWill II’ — testified for the prosecution on the first day of former police officer Derek Chauvin’s trial. He said he was headed to the Cups Foods store in Minneapolis on May 25, 2020, when he was drawn to a commotion. He said he saw police officers pinning a handcuffed Black man to the ground and Chauvin, who is white, grinding his knee into the back of Floyd’s neck.

Williams testified that he has been a competitive wrestler since he was in high school and turned professional mixed martial arts fighter in 2009. Given his training, he was allowed leeway by Hennepin County District Court Judge Peter Cahill to describe the hold he said he recognized Chauvin was using on Floyd.

He said Chauvin was using a “blood choke,” applying pressure with his knee on the side of Floyd’s neck, cutting off the blood flowing to his head.

In his opening argument, prosecutor Jerry Blackwell played for the jury a bystander video showing Chauvin with his knee on the back of Floyd’s neck for what he said was 9 minutes and 29 seconds as two other officers helped hold Floyd down. Another, identified as Tou Thao, kept Williams and other witnesses at bay as they pleaded with Chauvin to relent.

Blackwell told the jury that Chauvin “betrayed his badge” when he dug his knee into Floyd’s neck “until the very life was squeezed out of him.”

Williams said he locked eyes with Chauvin at one point during the street encounter.

“He looked at me. It was the only time he looked at me when I said it was a blood choke,” Williams testified.

He said Chauvin was also using what fighters call a “shimmy” to tighten his hold on Floyd.

Williams added that he had gone fishing earlier that day with his son. Seeing the life drain out of Floyd reminded him of how he suffocated the fish in a plastic bag.

He said he saw Floyd “slowly fade away like the fish in the bag” with his eyes rolling back in his head until he stopped begging for his life and went unconscious.

Williams will next face cross-examination from Floyd lawyer Eric Nelson.

“To turn to the defense, how do you deal with something like that?” DiCello said. “Well, you’re going to have to find something extraordinary about their witness to expose, something that maybe shows that he’s there just to win the fight for the Floyd family and for that whole cause, that he’s there somehow to exaggerate.”