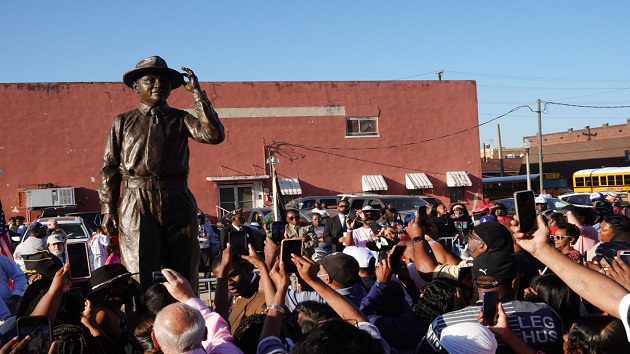 (GREEENWOOD, Miss.) — The Mississippi community of Greenwood erected a towering statue Friday in honor of Emmett Till, the 14-year-old Black boy whose murder sparked much of the 20th century civil rights movement.

“I feel that when young people ask me what the memory of Emmett Till is, we have this statue as a memory,” Mississippi state Sen. David Jordan, who represents Greenwood, told ABC News. “He liberated all Black people for all that he sacrificed.”

The memorial statue stands at 9-feet tall — a bronze figure reminiscent of Till’s infamous portrait with a white button-down shirt, slacks and his left hand tipping his hat with a slight grin on his face.

The statue’s unveiling comes just a week after the release of “Till,” a film detailing the untold chapter of Till’s story centered around his mother, Mamie Till-Mobley, who championed civil rights activism following the murder of her son.

“This is a great day as we take another leap forward in recognizing the life and legacy of Emmett Till,” the Rev. Wheeler Parker Jr., Till’s only remaining family member who saw his cousin the night he was kidnapped, told ABC News.

Till, a Chicago native, was murdered in in August 1955 after he was accused of whistling at a white woman in a grocery store in Drew, Mississippi, about 40 miles north of Greenwood, the county seat in the Delta region. The two white men arrested for kidnapping, torturing and lynching the 14-year-old were acquitted by an all-white jury.

Till-Mobley insisted on an open-casket funeral for her son to allow the surrounding community to witness the torture inflicted onto her son. She became a prominent leader of the civil rights movement, adamant that her son should not have died in vain.

Jet Magazine published the daunting image of Till’s battered face that changed lives forever. Numerous Black publications, including The Chicago Defender, New York Amsterdam News and various others, were charged with moving the needle forward reporting on the atrocity.

“When I met Rosa Parks in 1961, she said she didn’t get out of that seat for Emmett Till,” Jordan said.

But there are still reminders of Mississippi’s segregated past everywhere. A Confederate monument stands outside the Greenwood courthouse’s lawn, only a few miles away from Greenwood’s Rail Spike Park where Till’s new statue is located.

“As so many people are determined to erase our history, we are blessed to have so many more allies in the struggle to keep our story alive,” Parker said. “This statue is affirmation that our lives matter.”

Despite the demographics of Greenwood and Leflore County being about 70% Black, it took state officials years to erect the statue. This year, Jordan was finally able to allocate $150,000 in state funding to commission Utah artist Matt Glen to sculpt the statue.

“I am elated that it happened here in Mississippi, and this is a glorious day for all of the people in Greenwood, Mississippi,” Jordan said.