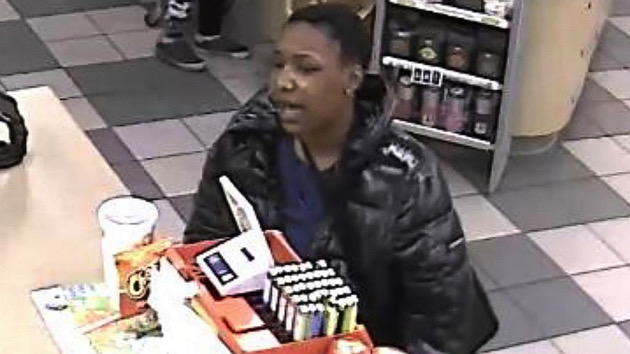 Nalah Jackson, a suspect in the disappearance of Kason Thomass, captured on video at a gas station in Huber Heights, Ohio. -- Columbus Ohio Police

(COLUMBUS, Ohio) — A woman who allegedly stole a car in Columbus, Ohio, with twin babies inside has been charged with two counts of kidnapping as the FBI joined a massive multi-state search for her and one of the missing infants police suspect is still in her possession.

Columbus Police Chief Elaine Bryant said at a news conference Wednesday evening that detectives have found no trace of the suspect Nalah Jackson, 24, or the kidnapped 5-month-old baby, Kason Thomass, since early Tuesday morning when Jackson was allegedly caught on surveillance video abandoning Kason’s twin at the Dayton International Airport.

The search for Kason, who was last seen wearing a brown onesie, was launched Monday night after he and his twin brother, Kyair, went missing when Jackson, homeless woman, allegedly stole their mom’s running car. The twins were inside the vehicle as their mom stepped away to pick up a food order, police said.

Kyair Thomass was found around 4:40 a.m. Tuesday abandoned at the Dayton International Airport, more than 70 miles from Columbus, which a deputy police chief called, “a troubling aspect of this case.”

She said the FBI is assisting in the search for the suspect and Kason, providing personnel and technology.

She pleaded with the public Wednesday to come forward with any information no matter how small it may seem.

Bryant said the search has been expanded to five states surrounding Ohio.

Wednesday’s news conference came about 24 hours after Bryant made a direct appeal for Jackson to surrender the baby, saying, “we’re begging you to please return Kason.”

Surveillance images released by police captured Jackson at a gas station in the Dayton suburb of Huber Heights early Tuesday morning driving the stolen black 2010 Honda Accord. In a statement posted on Twitter, police said that while at the gas station, Jackson asked an employee for money.

Weir said several witnesses who encountered Jackson at the airport said she asked to borrow their cellphones to make a call.

He said it was “troubling aspect” that Jackson would leave one of the babies but keep the other.

“It’s perplexing as to why that would be,” Weir said. “Obviously we could all let our imaginations run wild, but we have to deal with what the facts are, and the facts are we’re still looking for one child.”

Bryant said the incident unfolded about 9:45 p.m. Monday while Kyair and Kason were alone in the Honda Accord their mother left running after stopping a Donatos Pizza restaurant in the Short North Arts District of northeast Columbus to pick up a Door Dash order.

Bryant said witnesses told police that Jackson was seated inside the restaurant when the mother walked in.

The car has not been located and Bryant said it remained unclear if the suspect dumped the vehicle somewhere or was still driving it.

An Amber Alert was issued by the state Highway Patrol around 1:37 a.m. Tuesday. Police said the delay in issuing the alert was due to the stolen vehicle, which the mother recently purchased, not having license plates.

Bryant said at least 60 Columbus police officers have been assigned to the case and other law enforcement agencies were assisting in the search for the child. The chief said officers checked multiple residences around Columbus where Jackson once lived and searched several homeless encampments in Columbus she has been known to frequent.

Weir said he is worried about Kason’s well-being, saying, “We consider this child to be in danger.”

“This is a cry for help,” Weir said. “We’re asking the community to come forward and help us find this child.”