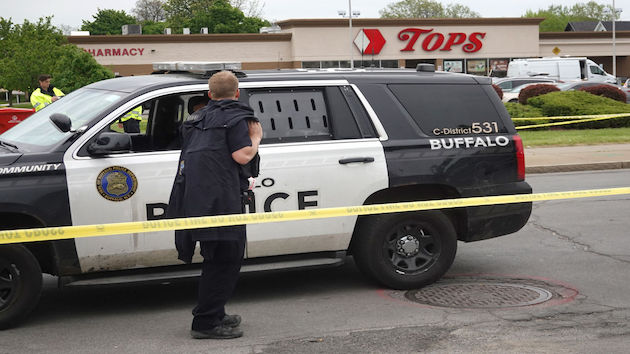 (NEW YORK) — When Payton Gendron, the 18-year-old white man charged in connection with the murders of 10 Black people at a supermarket in Buffalo, New York, was a senior in high school, he allegedly wrote a paper saying that he wanted to commit murder-suicide, according to authorities.

That prompted the assistant principal of Gendron’s high school to call New York State Police and report Gendron, according to law enforcement. After a day-and-a-half mental health evaluation a year ago, Gendron was released and his behavior wasn’t flagged to authorities before he allegedly carried out the mass shooting last Saturday.

Gendron has pleaded not guilty.

Law enforcement sources tell ABC News how they handle mental health evaluations and police investigations regarding disturbed people and their access to firearms is very much a work in progress.

They point to how easily Gendron allegedly sidestepped an investigation to see if he was dangerous following the incident at his high school.

Buffalo suspect had made references to murder-suicide, sources say

A review by ABC News of the 589-page document allegedly containing messages first posted on the social media platform Discord appears to show that Gendron simply misled law enforcement and mental health officials when confronted after writing that senior class paper that he had thoughts of murder-suicide.

In the document, Gendron writes of landing in a hospital emergency room in May 2021 for 20 hours because he referenced murder-suicide in terms of how he planned to mark his graduation from high school — as part of an economics assignment.

He told law enforcement and mental health officials he been joking. According to the social media messages, that was a lie. He allegedly wrote in Discord that the murder-suicide reference was specifically about his developing plans to murder minorities whom he believed were replacing white people in American society.

Gendron said the murder-suicide quote in his school assignment may have even been a cry for help but he lied so he could keep his plan in motion, because killing, he said, was precisely what he was planning.

Previous mass shooters have often left clues or raised concerns with others and, in some cases, authorities have missed signals that could have otherwise prevented an attack.

On a summer night in August 2019, Connor Betts opened fire at the entrance of Ned Peppers Bar in downtown Dayton, Ohio, killing nine, including his brother, and wounding 17 before responding officers shot him to death.

Betts, according to the U.S. Secret Service, “had a history of concerning communications, including harassing female students in middle and high school, making a hit list and a rape list in high school, telling others he had attempted suicide, and showing footage of a mass shooting to his girlfriend.”

Betts had an “enduring fascination with mass violence,” the FBI’s Behavioral Analysis Unit concluded in a report released in November.

“The FBI’s BAU assessed the attacker’s enduring fascination with mass violence and his inability to cope with a convergence of personal factors, to include a decade-long struggle with multiple mental health stressors and the successive loss of significant stabilizing anchors experienced prior to August 4, 2019, likely were the primary contributors to the timing and finality of his decision to commit a mass shooting in Dayton, Ohio,” the report stated.

One reason that family and friends did not alert authorities about Betts was potentially because of “bystander fatigue,” according to the report.

Bystander fatigue occurs when people around the suspect don’t pay attention or take any action “due to their prolonged exposure to the person’s erratic or otherwise troubling behavior over time,” according to the Behavioral Analysis Unit.

Nikolas Cruz has pleaded guilty to walking into Marjory Stoneman Douglas High School in Parkland, Florida, on February 18, 2018, and opening fire inside the school killing 17 and wounding 17 more.

More than a month before the shooting, the FBI was warned about Cruz by a person close to him through the FBI’s public access tip line, according to an FBI statement in 2018.

“The caller provided information about Cruz’s gun ownership, desire to kill people, erratic behavior, and disturbing social media posts, as well as the potential of him conducting a school shooting,” the FBI statement says.

The information, the FBI admitted, should have been forwarded to the FBI Miami field office and assessed as a “threat to life,” where it would’ve been investigated.

The school shooting was one of the deadliest in American history.

The FBI was later sued by the families of the Parkland shooting for not appropriately assigning the call to the Miami Field Office. In March, the Justice Department, while not admitting the full guilt of missing the signals Cruz exhibited, settled with the families for $127 million.

A jury will decide whether to sentence him to death or life in prison without chance of parole.

In October of that same year, Robert Bowers is accused of walking into the Tree of Life Synagogue in Pittsburgh, Pennsylvania, and killing 11 people. Bowers, according to a criminal complaint charging him with the crime, made comments shortly after he was arrested to investigators about wanting to kill people who are Jewish.

Bowers was not known to law enforcement before October 2018, the then FBI Special Agent in Charge told reporters at the time. Moments before he carried out the shooting, Bowers posted antisemitic statements on the platform.

Bowers is facing trial for the 2018 shooting and has pleaded not guilty.

Friends told the New York Daily News that two weeks before the shooting, Roof went on a bigoted rant while drunk about “segregation and killing people.”

Meek, according to the Daily News, took a gun away from Roof two weeks before the shooting unfolded.

“I only took it away because he was drunk. I didn’t take him seriously,” Meek said. “I do feel a little guilty because I could have let someone know,” Meek told the Daily News.

Alerting someone or giving a warning sign before a mass shooting is common, according to the U.S. Secret Service, which published a report in 2020 titled Mass Attacks in Public Spaces. The report found that nearly 65% of the mass attacks they studied in 2019 the attacker had threatened someone in the past, and 57% of attackers made some form of communication prior to the attack that should’ve elicited concern but didn’t.

“These concerning communications included making paranoid statements, sharing videos of previous mass attacks, vague statements about their imminent death, and one attacker telling his school counselor that he had a dream about killing his classmates,” the report says.

“The horrific attack in Buffalo underscores the challenges for law enforcement in identifying and preventing mass-casualty lone wolf terrorist attacks, with this being the latest in a string of similar ones committed by other white supremacists in the United States,” Ali, now an associate professor at the Ford School of Public Policy at the University of Michigan, said.

“In these attacks, white supremacist lone wolves focused on different victims — including African Americans, Latinos, Jews — based on their belief in anti-immigrant and racist tropes found in conspiracies like the “great replacement theory” or other sources like manifestos written by infamous attackers such as Anders Brevik and Brentan Tarrarent that fuel white supremacy across the globe,” Ali said.

Breivik is a Norwegian who killed 77 people in 2011 and Brenton Tarrant carried out the 2019 Christchurch, New Zealand, shootings at two mosques, murdering 51 people.