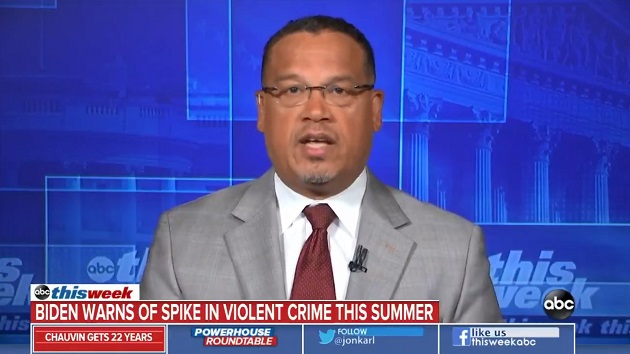 “Given the particular cruelty, the abuse of trust, committing this crime in a group, in front of kids — this sentence works,” Ellison told ABC “This Week” co-anchor Jonathan Karl.

Under Minnesota law, the maximum sentence for second-degree murder — the most severe of Chauvin’s charges — is 40 years.

“Now, you can’t replace the life of George Floyd, so true satisfaction is simply not available to us. But I think that this is certainly a sentence that reflects the seriousness. And, of course, this matter is not over yet,” he added.

On Derek Chauvin being sentenced to 22 1/2 years for the killing of George Floyd, Minnesota Attorney General Keith Ellison tells @jonkarl: “I think that the judge is right given the particular cruelty… this sentence works.” https://t.co/cYI8dXtX9Y pic.twitter.com/MtOYTRCv5x

Though Ellison said the sentencing decision was fair, he also said that he believes there is more work to be done in the field of policing.

“All over the United States, states are looking at police reform. We need them to act. We need departments to act,” Ellison said. “We need prosecutors, and we need other police officers to look inside and say, ‘What can we do to build greater trust and greater cooperation with our communities that we protect and serve every day?"”

Ellison also expressed his support for the passage of the George Floyd Justice in Policing Act, a comprehensive law enforcement reform bill that would ban chokeholds and other potentially deadly force tactics and amend the qualified immunity granted to police officers.

“In a larger perspective, we have got a lot of lifting to do. And when it comes to Congress, I think they could lead the way by passing the George Floyd Justice in Policing Act. I think it’s essential, and the country needs it,” Ellison said.

With concerns over a spike in crime over the summer, @jonkarl asks MN AG Keith Ellison: “What steps need to be taken right now?”

Ellison: “A community-led effort to engage neighbors… in cooperation with law enforcement might just be the key.” https://t.co/AZjd0Xq4Ky pic.twitter.com/ozuYlFMa9B

“What steps need to be taken right now, as we face this potential for an increase in violence now? You mentioned the bill in Congress, but what else needs to be done now?” Karl asked.

When asked about the uptick in violent crime this summer, Ellison said he believed law enforcement and communities needed to come together to address this trend, citing the “21 Days of Peace Movement” in Minneapolis, because “a community-led effort to engage in and rebuild relationships with neighbors in cooperation with law enforcement might just be key all over the country.”

“Let’s have religious leaders, faith leaders, community leaders, get out there working with law enforcement to try to stave off what could be a difficult summer if we don’t get ahead of it, and I think we need to,” he added.