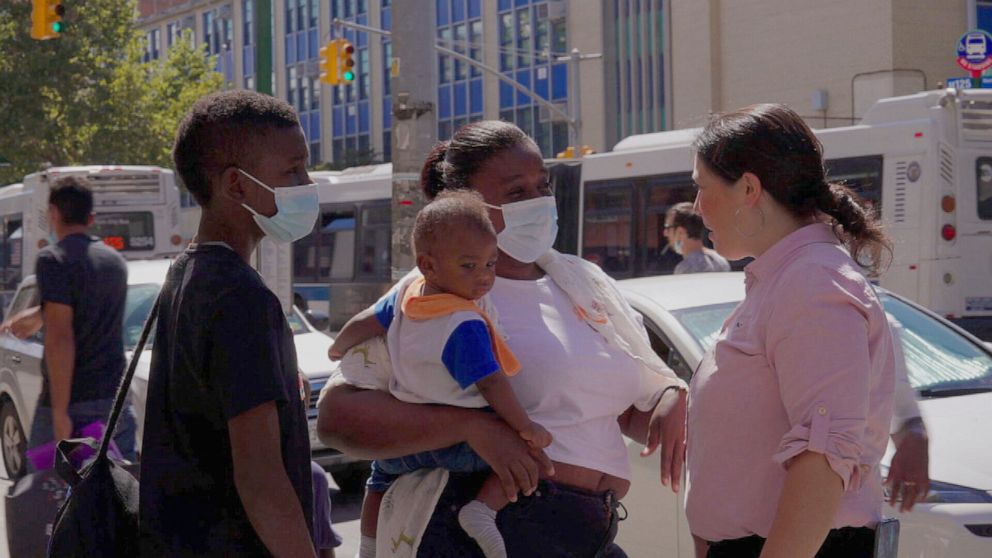 (NEW YORK)– Thousands of migrants seeking asylum who endured a 2,000-mile journey over several days, with little to no belongings or family, aboard buses sent from Texas now find themselves facing challenges establishing their new lives in New York City.

Texas Gov. Greg Abbott, since early May, has been sending busloads of migrants out of Texas to cities with Democrat leaders, including New York City and Washington, D.C. The Republican governor says he started the busing programs in response to the Biden administration’s immigration policies which he claims inadequately secure the border, forcing states like his to bear the brunt of migrant waves.

Many of the migrants are still arriving almost daily in the Big Apple, including 18-year-old student Brayan Amaro, who began his journey alone in his home country of Venezuela.

“I’m still a boy who’s very young. I hope to have better opportunities here,” Amaro said. “If I can keep on studying. All of that.”

Amaro says this will be his opportunity to “get ahead and be a better person than in Venezuela.” Migrants arriving from Texas at the Port Authority Bus Terminal in Manhattan are greeted by volunteers from aid groups, nonprofits and the city’s immigration office.

“Many of them are seeking asylum at the border,” Muzaffar Chishti, a senior fellow at the Migration Policy Institute, told ABC News. “Instead of people being taken at a place of their choice, or what would be the most logical place for their claim to be processed, they’re being sent to New York and D.C., where they may not have any family, where they may not have a lawyer that they would choose to be represented by.”

Nonprofit organizations continue to step in and distribute resources to welcome migrants arriving with their few belongings.

Ariadna Phillips, the founder of South Bronx Mutual Aid, and a group of volunteers lead efforts to secure transportation for migrants.

“This is just regular people here in New York banding together to make sure that, you know, our friends that are coming in are feeling safe and welcome and appreciated,” Phillips told ABC News.

“I have my mother and my father. Look, it was for them, I came for them,” Alvarez said in Spanish.

Like Amaro, Alvarez made the journey through Venezuela to Texas’ border on her own. With Phillips’ support, Alvarez is set to board another bus headed for upstate New York, where she will stay with a host family that she has yet to meet.

“In New York, we have what’s called the right-to-shelter city, where if anyone comes to our city, we have a moral and legal obligation to provide shelter, and we’re doing that every day,” New York City Mayor Eric Adams told ABC News.

Abbott’s busing operation led to the arrival of more than 6,000 asylum seekers in New York City alone, according to Adams. The high demand placed unforeseen strain on the city’s social services, calling for the opening of 13 emergency shelters to house the incoming migrants.

Adams said this “crisis calls for coordination” between the two administrations, but they have still been unable to collaborate on the issue.

In New York City, overwhelming support is being traced back to nonprofits, which are bearing the brunt on the unprecedented migrant influx and the decreased availability of resources and services.

A mother from Colombia, now based in the South Bronx with her four children, arrived on a bus from Texas a few days ago. The bus ride, she said, was “a little hard,” with not even a bathroom for her children to use.

“We lasted three days in the bus with hunger, with thirst,” the mother told ABC News in Spanish.

With the help of one organization, she’s been able to make strides toward opportunity and stability for her new life with her family in New York City.

“To be able to give a, offer a good future for my kids,” the mother said in Spanish. “So that in that same way we’re able to support other people who arrive here as well, just like how they have supported me.”