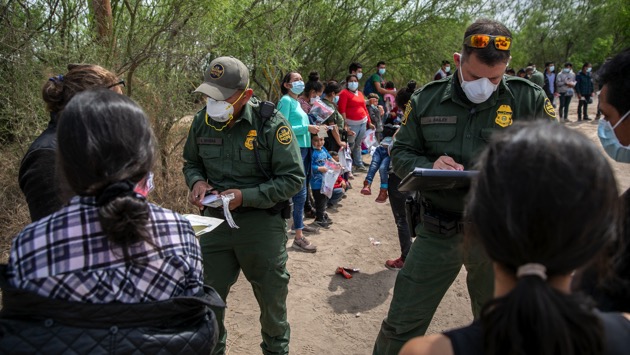 (NEW YORK) — Crossing the Rio Grande is the last leg of an often long and always harrowing journey for hundreds of people hoping to start a new life in the U.S. It’s there that, even in the dead of night, the Texas Department of Public Safety patrols the border for human smugglers.

Father Flor Rigoni, the director of a shelter in southern Mexico, told us in 2016 that he has witnessed many take on the extremely risky trek to U.S. soil, including women, children and the elderly.

As of February, nearly 100,000 people were being held at U.S.-Mexico border facilities, according to the U.S. Border Patrol. There was a 28.8% increase of migrants between January and February alone.

Early into his new administration, President Joe Biden took swift action to reverse several immigration policies of the Trump era. While the new White House has come under fire for pulling back hard-line restrictions before it was fully prepared to handle the surge of migrants, some remain in place, ABC News has reported.

As a result of intensifying pressure from the U.S. to secure the border, the Mexican and Central American governments have cracked down on people trying to make their way to the U.S. Thousands hope to avoid Mexican authorities by traveling different ways to get up north, including crossing the Usumacinta River along the Guatemala-Mexico border.

In order to cross the river undetected, thousands pay local human traffickers, who are often affiliated with the cartels, to ferry them across, according to locals in the area.

Those with money hire local smugglers known as coyotes, who can provide resources like cars, while poorer people often ride atop freight trains.

One train, known as “La Bestia” or the Beast Train, is infamous for the many people hurt or killed while trying to board its moving freight cars.

Not only are trains hard to board, but organized crime and local gang members often take advantage of migrants, according to Adam Isacson, the director for defense oversight for the Washington Office on Latin America, an advocacy group. Many of these poor migrants face robbery and assault.

“Organized crime and local gangs and thugs have gotten pretty good at trying to squeeze whatever money they can get from the people who board these trains,” Isacson said. “People who don’t pay a fee to these gangs get thrown off the trains.”

Some, like children, don’t make it all the way and turn around. Two boys were on their way to the U.S. but decided to return to their home country of Honduras. They told ABC News that since heading back, they have been walking for five days straight.

“We wanted to go to the United States, but now I just want to go home and be with my family who need me, and I need them,” one boy said in Spanish. “Immigration officials are not helping us because we are underage.”

“We just want to go back with the help of God,” the other boy added in Spanish.

Honduras migrant Irmana Morado told ABC News in March that she has been staying at one of these safe houses in Mexico since October 2019, after she was deported from the U.S. She said her journey to find a better life is essential for her family.