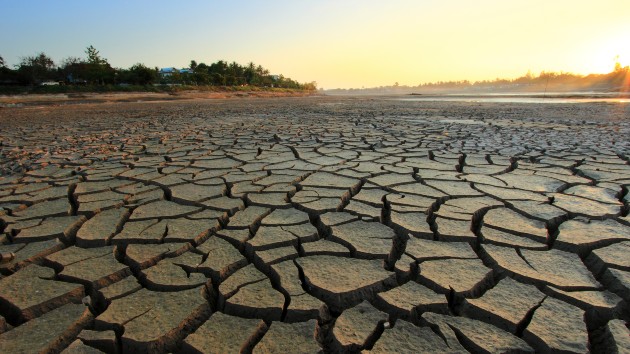 (NEW YORK) — The “megadrought” that’s plaguing much of the western U.S. is a direct consequence of warming global temperatures, according to experts.

The term is used to describe a severe and intense drought that spans a couple of decades, National Oceanic and Atmospheric Administration meteorologist Brad Pugh told ABC News.

The current megadrought is further evidence that the climate has been warming over past decades, according to the experts.

“Essentially, half of the severity of the ongoing megadrought has been attributed to warming temperatures alone — and without that warming, the drought would arguably not be a megadrought at all,” UCLA climate scientist Daniel Swain told ABC News.

“For this reason, the temperature-driven portion of this is not going to reverse itself this century — even if we see a higher precipitation period that otherwise would have broken the megadrought,” Swain said.

Nearly 75% of the American West is currently in severe drought, according to the U.S. Drought Monitor. The situation in the Southwest has origins dating back to the late 1990s, but the ongoing megadrought has intensified in the last year, Pugh said.

“The major factor in the development and intensification of the drought across the Southwest was tied to one of the driest monsoons on record during 2021,” Pugh said.

Precipitation was “well below average” across Arizona and New Mexico during July, August and September.

Typically during the summer months, much of the southwestern U.S. is dry because the jet stream pushes northward and big rain systems don’t reach the desert. During winter, as the jet stream shifts southward, rain and snow tend to return to parts of the region.

This is not the first time the American West has been in a megadrought, Richard Saegar, a research professor at Columbia University’s Lamont Doherty Earth Observatory, told ABC News.

Tree ring records “have made clear” that the U.S. has experienced megadroughts over the last millennium, including a series during the Medieval period comparable to the current one, Saegar said.

“When the tropical Pacific Ocean becomes cooler than normal for long periods of time — which it can due to internal atmosphere-ocean variability — it alters the pattern of rainfall over the tropical Pacific, which can then alter the global atmosphere circulation and it does this in a way that can cause megadroughts in the American West and southern South America,” Saegar said.

Severe drought is not reversed quickly, and because of climate change reversing this latest megadrought might not be as straightforward as a seasonal change, Saegar added.

“Due to rising greenhouse gases, droughts that occur now are warmer than droughts used to be because they are occurring against a background of global warming,” Saegar said. “The current megadrought has been driven by reduced rain and snow but has been made worse by warming temperatures due to climate change.”