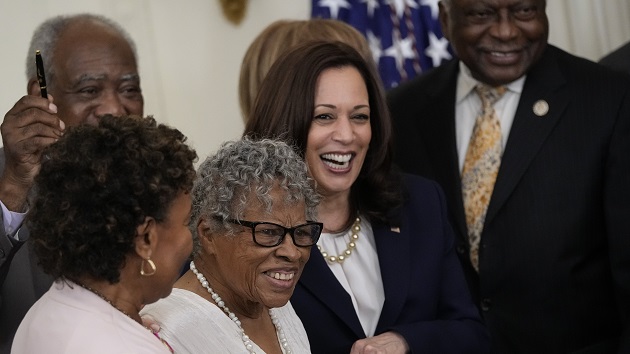 (WASHINGTON) — When President Joe Biden signed a bill Thursday making Juneteenth a federal holiday commemorating the end of slavery in the United States, there was one woman in the room who captured well-deserved attention.

Opal Lee was called the “grandmother of the movement” to make Juneteenth a federal holiday by Biden, who at one point left the stage and walked over to the 94-year-old to speak with her directly.

And Vice President Kamala Harris, the first Black vice president, also gave Lee her due in her remarks, saying, “And looking out across this room, I see the advocates, the activists, the leaders, who have been calling for this day for so long, including the one and only Ms. Opal Lee.

In 2016, at 89 years old, Lee, a former teacher and lifelong activist, walked from her home in Fort Worth, Texas, to the nation’s capital in an effort to get Juneteenth named a national holiday.

“I was overjoyed. I was ecstatic,” Lee said Friday on “GMA3: What You Need to Know” of her reaction to the bill signing. “I was so happy I could have done a holy dance.”

Juneteenth — also known as Freedom Day, Liberation Day and Emancipation Day — is celebrated on June 19 to mark the day in 1865 when African American slaves in Galveston, Texas, were among the last to be told they had been freed — a full two-and-a-half years after the Emancipation Proclamation outlawed slavery in the Confederacy and two months after the Civil War officially ended.

To this day, Lee walks two-and-a-half miles each year on June 19 to mark the time between the Emancipation Proclamation and when the news of freedom arrived in Galveston.

“Walking tomorrow is going to be a joy,” she said. “We’ve done it before and I’ll do the two-and-a-half miles [tomorrow] to symbolize that slaves in Texas didn’t know they were freed for two-and-a-half years.”

Lee said she now hopes more people across the country will join her in walking, saying, “We need to go about the business of everybody participating.”

A Texas native, Lee said she experienced racial unrest firsthand during her childhood, including a night, on June 19, 1939, when a group of hundreds of rioters set fire to her family’s home.

“The people didn’t want us. They started gathering. The paper said the police couldn’t control the mob. My father came with a gun and police told them if he busted a cap they’d let the mob have us,”