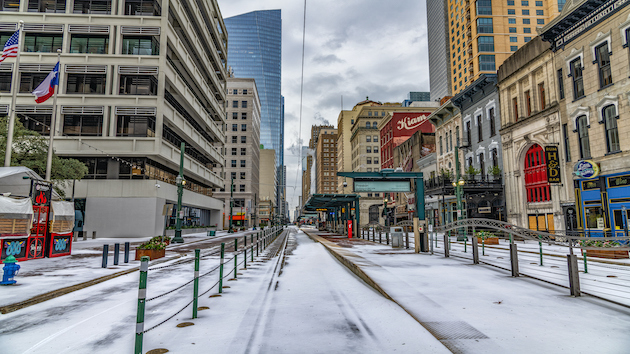 (HOUSTON) — As winter weather pummels Texas with snow, ice and freezing temperatures, Houston businessman “Mattress Mack” is opening his doors to those in need once more.

Jim “Mattress Mack” McIngvale first went viral in 2017 when Hurricane Harvey struck Houston. McIngvale opened some of his Gallery Furniture stores during the storm, turning them into evacuation shelters.

Houston is again in danger this week, as storms have knocked out power and turned roads to ice — and “Mattress Mack” wants his community to know there is a safe place to turn.

“It’s kind of a feeling of déjà vu doing this again, though obviously the circumstances are quite a bit different,” McIngvale told ABC News. “But the need is tremendous.”

“Anybody who needs it — whether they’re homeless, whether they lost power, whether it’s just wanting to come in and get something to eat — anybody wants to come in, we’re here for them,” he said. “We all have a responsibility for the well-being of the community.”

Gallery Furniture is opening its Houston and West Houston stores and is putting mattresses in its new trade school and high school. McIngvale estimates they’ll be able to shelter 200 to 300 people at each site.

With so many in Houston without power, McIngvale said he has a generator and bought “10,000 gallons’ worth of diesel” as a plan B. In the Houston area, 1.3 million people remain without power, Houston Mayor Sylvester Turner said Tuesday. Nearly 800 people are being housed in warming centers, which are at full capacity.

“It’ll be a tough couple of days to get through the storm but we’ve been through this before with the hurricane,” he said.

“They’re all slightly shellshocked when they get in here. We feed ’em, we give ’em sweatshirts, and they warm up. They feel safe,” he said. “It’s a good feeling in a bad situation.”

McIngvale said his team will be enforcing mask-wearing and social distancing and will distribute hand sanitizer.

As “Mattress Mack” prepares his stores for his neighbors, his 10-year-old granddaughter is by his side, which he’s using as a learning opportunity.

“I’m trying to teach her that the essence of living is giving,” McIngvale said.