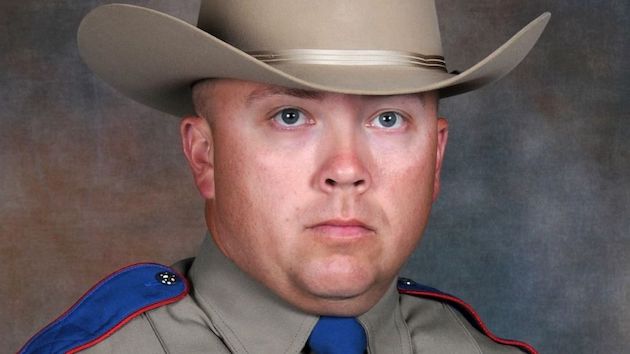 (WACO, TX.) — A man wanted on suspicion of shooting a Texas trooper multiple times in a rural roadside ambush has been found dead from an apparent self-inflicted gunshot wound, according to authorities.

The body of the 36-year-old alleged gunman was discovered Saturday night in a house in the Central Texas town of Mexia, where he had barricaded himself during a standoff with law enforcement officers, the Texas Department of Public Safety said in a statement.

The suspect’s death came a day after he allegedly ambushed Texas Highway Patrol Trooper Chad Walker, a married father of four children, shooting him in the head and abdomen when Walker responded to what he apparently thought was a disabled motorist parked on the shoulder of a road about 40 miles northeast of Waco, public safety officials said.

Walker was taken to a hospital in Waco, where he was in critical condition, officials said.

“Please keep Trooper Walker and his family in your thoughts and prayers during this most difficult time,” reads a statement from Todd Snyder, regional director of the state Department of Public Safety.

Counselors and a Texas Rangers chaplain have been with Walker’s wife and their 15-year-old son, 7-year-old twin daughters and a 2-month-old baby girl, Snyder said.

The Texas Rangers, part of the state’s Department of Public Safety, is investigating the shooting.

The suspected gunman was identified by Snyder as Dearthur Pinson Jr. of Palestine, Texas.

The shooting unfolded around 7:45 p.m. on Friday, on a rural road about five miles outside of Mexia, a small town of nearly 7,400 people in Limestone County, officials said.

Walker, who was alone, pulled up behind a disabled vehicle on the shoulder of the road and was attacked before he could get out of his patrol car, Snyder said.

Snyder alleged that upon seeing Walker’s patrol car, Pinson “immediately emerged from the driver’s seat of the disabled vehicle armed with a handgun and fired multiple rounds at Trooper Walker through the patrol unit’s windshield.”

After allegedly shooting Walker, Pinson walked back to his vehicle, retrieved a backpack and fled the scene on foot, Snyder said.

Walker has been a member of the Texas Department of Public Safety since 2015.

At least two candlelight prayer vigils were held for Walker Saturday evening, one outside a Waco restaurant and another outside a courthouse in nearby Freestone, Texas, which was organized by firefighters who have worked with Walker on several emergency calls.

During the Freestone vigil, Andrew Weitner, chaplain of the Freestone Fire Department, described Walker as a courageous law enforcement officer and a devoted father and husband.

“You can see the heart of a father, the heart of a servant, someone that knows and recognizes that he’s going out to put his life on the line not only for his children but also for the community,” Weitner said. “It doesn’t stop here. Just like anything or any opportunity, the chance to continue to intercede, the chance to pray for him is still necessary.”