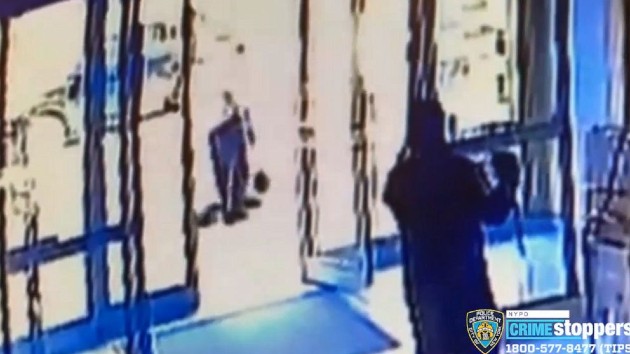 (NEW YORK) — The alleged suspect who was caught on video repeatedly kicking a 65-year-old Asian American woman in New York City as witnesses seemingly stood by has been arrested, police said.

The attack occurred on Monday at around 11:40 a.m. local time in front of an apartment building in Midtown Manhattan. Police released surveillance footage that showed a man approaching the woman on the sidewalk and kicking her in the stomach, knocking her to the ground. The man then kicks the woman in the face multiple times while making “anti-Asian statements toward her” before casually walking away, police said.

The woman suffered “serious physical injury” and was hospitalized in stable condition, according to police.

Investigators learned that Elliot lives in a nearby hotel that serves as a homeless shelter. He was taken into custody before dawn Wednesday after police spent hours watching the hotel and the neighborhood.

Elliot served 17 years in New York state prison after he was convicted of fatally stabbing his mother in 2002. He was released on lifetime parole in 2019, police said.

The video of Monday’s attack also shows people inside of the building lobby who appear to stop what they are doing to watch the incident unfold. One of them then shuts the door as the suspect walks away and the woman is left on the ground.

The Brodsky Organization, the company that owns the building, said that two lobby staff members who witnessed the attack have been suspended pending an investigation in conjunction with their union. The company condemned racism and violence against the Asian American community.

“We are extremely distraught by the horrific attack that occurred outside our building, and our hearts go out to the victim. We have been working closely with the NYPD, elected officials, and civic leaders to provide any information and to seek justice,” the Brodsky Organization said in a statement Tuesday. “We take this situation very seriously, and are committed to strengthening internal training and working with our community to ensure the safety of our residents and neighbors.”

“You try to make sense of it and you can’t,” Shea told NY1 in a recent interview. “I don’t know who attacks a 65-year-old woman and leaves her on the street like that.”

Also on Monday, another individual was captured on cellphone video violently punching and choking an Asian American man on a subway train in Brooklyn. The New York City Police Department said it “is aware of this video and is investigating.”

Anyone with information regarding either incident was urged to call the New York City Police Department’s Crime Stoppers hotline at 1-800-577-TIPS.

Since Friday, the New York City Police Department has ramped up patrols in predominately Asian communities, including the Queens neighborhood of Flushing and Chinatown, according to Shea.

It’s the latest in a spate of attacks targeting Asian Americans in New York City and across the nation. The coronavirus pandemic and its suspected origins in the Chinese city of Wuhan is cited as having led to a fresh onslaught of anti-Asian discrimination in the United States that has waged on for over a year.

From March 19, 2020, to Feb. 28, 2021, there were more than 3,795 hate incidents, including verbal harassment and physical assault, against Asian Americans and Pacific Islanders in the United States, reported to Stop AAPI Hate, a nonprofit organization that tracks such incidents.

On March 16, a gunman killed eight people, including six Asian women, in three separate shootings at spas in the Atlanta area. Rallies have been held in dozens of U.S. cities in recent weeks calling for an end to anti-Asian violence.

Texas restaurant owner takes down alligator on his front porch