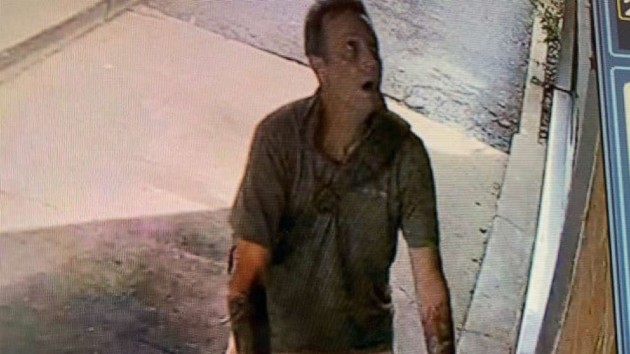 (STAFFORD, Va.) — A man has been arrested after allegedly breaking into a bank and stealing some loose change and a soda before leaving the scene of the crime.

The incident occurred at approximately 9:06 a.m. on Monday, June 23, when Sergeant Zotos from the Stafford County Sheriff’s Office in Stafford, Virginia was called to the Carter Bank & Trust to a report of a burglary after bank tellers reported that they suspected the business had been burglarized overnight.

Once he arrived at the bank, Sergeant Zotos began to review surveillance footage from the day before and found that on Sunday, June 20, a male suspect — later identified as 48-year-old James Rupe of Roadsville, Virginia — had utilized construction scaffolding that was outside the bank in order to gain access to the building’s roof before falling through the drop ceiling and climbing down some scaffolding inside the establishment, according to the Stafford County Sheriff’s Office.

“The suspect is seen rummaging through cash drawers and stealing change. He then retrieves a soda from the employee breakroom and drinks it before exiting the bank the same way he entered,” the Stafford County Sheriff’s Office said in a statement posted on social media. “Once outside the bank, the suspect removes the change from his pocket and puts it in his backpack before leaving the area on his bicycle.”

Upon reviewing the bank’s security footage, Zotos noticed that the suspect had easily identifiable tattoos on his arm and subsequently sent photos of the footage to fellow deputies to keep a look out for him.

It was only a few hours later, at approximately 2:20 p.m., when Deputy A. W. Sypolt responded to the Red Roof Inn to reports of a disturbance when employees at the hotel said a man was trespassing on the property.

“Upon arrival, Deputy Sypolt recognized the arm tattoos on the suspect, James Rupe, 48, of Rhoadesville, from the photos sent by Sergeant Zotos,” said Stafford County Sheriff’s Office. “Sergeant Zotos arrived on scene and confirmed Rupe was the suspect seen on the bank’s security footage.”

Rupe was then taken into custody and a warrant was obtained for breaking and entering. He is now being held without bond at the Rappahannock County Jail.