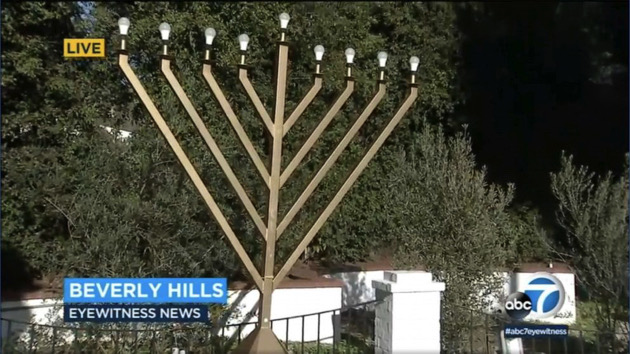 (BEVERLY HILLS, Calif.) — A man allegedly vandalized a large menorah and carved a Nazi symbol onto its base on the first night of Hanukkah, according to Beverly Hills, California, police.

The menorah at a Beverly Hills home was vandalized Sunday night by a man who threw rocks and put a Nazi sign on its base, Beverly Hills mayor Lili Bosse tweeted.

“I was very angry and I was determined to immediately catch this despicable person,” Bosse told ABC News on Tuesday.

Beverly Hills police said its officers responded to the private property at about 8 p.m. Sunday.

King was arrested and charged with felony vandalism and a hate crime, police said.

The mayor said the victims, a “warm” and “kind” Jewish family of Iranian descent, immediately had their menorah fixed.

For Bosse, antisemitism is personal. She said her mother, an Auschwitz survivor, lost her entire family in the Holocaust.

“She told me to ‘Always tell the story,"” the mayor said. “It was really important to her that I, and others, continue to share what hatred could do.”

“She very much believed in courage and strength and that we have to never give up and always speak out against hatred,” Bosse said. “Not only hatred toward Jews, but hatred of any kind. … We cannot be a bystander.”

Jeffrey Abrams, regional director of the Anti-Defamation League in Los Angeles, thanked the police department for its “swift response to this disgusting act of antisemitic vandalism.”

Abrams encouraged anyone who sees an “incident of bigotry of any kind” to report it to the police and the ADL.

More charges against King are possible, according to police. He’s due in court on Tuesday.

President Joe Biden condemned the rise in antisemitism across the U.S. and around the world at a Hanukkah reception at the White House Monday night.

“I recognize your fear, your hurt,” he told the crowd, adding that he “will not be silent.”

“Today, we must all say clearly and forcefully, antisemitism and all forms of hate and violence in this country have no safe harbor in America,” Biden said.