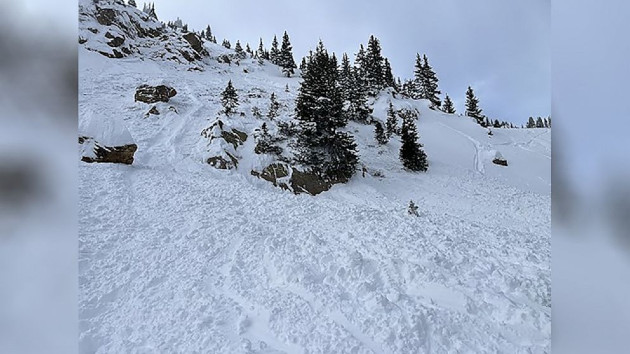 (NEW YORK) — A 44-year-old man has died after he was buried by an avalanche in Colorado, officials said.

The victim was among four snowboarders who got caught in the avalanche near Winter Park on Monday afternoon, the Colorado Avalanche Information Center said.

Two of the snowboarders were buried, the Grand County Sheriff’s Department said. Bystanders and relatives were able to rescue one of the buried snowboarders, but the second was pronounced dead at the scene, the sheriff’s office said.

“This is a pretty popular backcountry riding and recreating area,” said Ethan Greene, director of the Colorado Avalanche Information Center. “These folks actually did most of the rescue themselves, which is really what you need to do if someone’s buried in the snow pack. They don’t have a whole lot of time to wait for the cavalry to come, so to speak. So everybody in the group needs to have rescue equipment: that’s an avalanche transceiver, a shovel and a pro pole. and know how to use them. These folks actually had all that equipment. and they did a really great rescue. But unfortunately, one person still didn’t survive.”

The victim’s identity has not been released.

“The most important things that people can do are to check the avalanche forecast, make sure that you have some sort of training, make sure you carry proper rescue equipment,” Greene said. “Part of traveling in avalanche terrain is trying to expose just one person at a time. So as you’re planning your route, make sure that you’re spreading out and making sure that only one person is in the in a place where they could get caught in an avalanche at one time.”