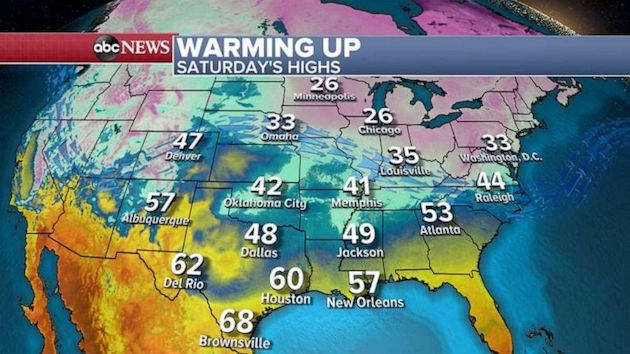 (NEW YORK) — The major winter blast that has gripped the nation for the last few weeks is finally lifting.

According to the National Weather Service, over 3,000 daily cold temperature records and 79 all-time cold records were made between Feb. 12 and Feb. 17.

In Monroe, Louisiana, an all-time cold duration was broken with 141 consecutive hours below freezing.

The next few days, however, will bring better weather for much of the U.S., including the South.

On Saturday, temperatures will be in the 40s, 50s and even 60s across Texas, Louisiana and Mississippi.

This is welcome news to most, as last week was one of the busiest winter weather weeks in recent memory.

As of Saturday morning, there are still 300,000 customers without power across seven states, according to poweroutage.us.

On Saturday, some mountain snow is expected in the western U.S.

Up to a foot of snow is possible in some of the mountain passes, especially California. This could cause some travel issues.

On Sunday, a piece of this incoming system will move over the Central U.S. and bring a quick hit of snow to parts of the upper Midwest, including Chicago.

The snow will arrive in the Great Lakes and parts of the Appalachians by Monday morning.

By Monday afternoon, some of that snow will make its way into the Northeast. Major cities may see some wet snow, but nothing too impactful.

Most areas will only see 1 to 3 inches of snow from this quick-moving system. Iowa, Minnesota, Pennsylvania and New York could see a bit more, possibly 3-6 inches.

There is some concern that lake effect enhanced snow could bring over 6 inches of snow in parts of upstate New York through Tuesday.