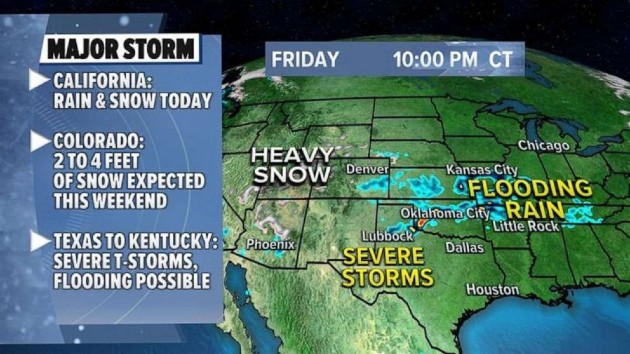 (NEW YORK) — A major storm is on the move Friday, with record-breaking snowfall along with tornado and flood threats expected from California to Kentucky.

This storm already brought 1 to 2 feet of snow for parts of California. Additionally, 1 to 2 inches of rain fell in the southern part of the state, causing a mudslide in Silverado Canyon. Evacuations for this mudslide were still in effect as of Friday morning.

The storm will continue to track east over the Rockies in the next 24 hours, bringing heavy snow to the area.

The worst of the storm will be on Sunday when heavy snow will be falling over Denver and severe thunderstorms could bring a threat for damaging winds and tornadoes further east into eastern Texas, Oklahoma, Arkansas, Mississippi and western Tennessee.

Snowfall totals could be measured in feet for Colorado and Wyoming, where up to 4 feet of snow is possible.

Denver could see 2 feet of snow this weekend, which could be one of its top five snowstorms in recorded history.

Meanwhile, on the East Coast, more than a dozen record highs were recorded Thursday. Even Boston reached the 70s.

However, this mild weather will be over shortly this weekend.

Gusty winds near 45 mph are expected Friday night into Saturday from New Jersey to Maine. These winds will usher in much colder air.

Most of the Northeast will feel like it’s in the teens and single digits on Sunday night.

How three states are moving to protect abortion rights after the fall of Roe v. Wade

Fourth of July travel forecast: Best days to hit the skies and the road