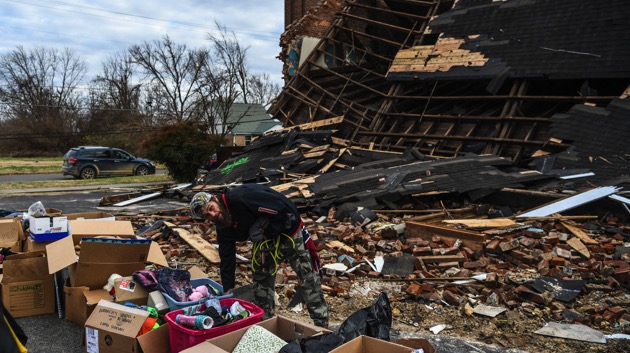 (WASHINGTON) — As climate change increases the severity of natural disasters, low-income school districts face disproportionately greater obstacles when attempting to recover from them, according to a Government Accountability Office report (GAO) obtained exclusively by ABC News.

Districts in high-poverty areas are already plagued with challenges — like outdated building infrastructure or a lack of resources — and when hit with the havoc wrought by a major disaster, the recovery process can be a tedious, uphill battle, according to the report released Tuesday. At the same time, natural disasters pose a disproportionate threat to students in already vulnerable educational settings, the report states.

But most districts that received certain federal recovery grants after major disasters that occurred during those years “had elevated proportions of students from certain socially vulnerable groups,” according to GAO’s analysis of federal data.

“Many natural disasters have had devastating effects on K-12 schools and the communities in which they are located — especially socially vulnerable communities for whom disaster recovery is more challenging,” the report reads. “We have found that school districts affected by natural disasters have faced a range of recovery challenges, including trauma and mental health issues among students and staff, lost instructional time, staff burnout, and financial strain.”

GAO spoke to officials from five school districts in socially vulnerable communities that detailed challenges their schools faced when recovering from a major disaster, and in most instances, physical recovery was one of them, according to the report.

A previous GAO report from 2020 showed that thousands of school buildings across the country could need critical repairs due to natural disasters, and revealed that “about half (an estimated 54%) of public school districts need to update or replace multiple building systems or features in their schools.”

The report, released on Tuesday, cites a “subject matter expert,” who reportedly told GAO that “socially vulnerable groups are more likely to attend under-resourced and poorly maintained schools, which in turn are more likely to suffer extensive damage due to disasters, causing extended school closures and student displacements.”

And in some instances, “low-income school districts can be denied funding or receive less funding than needed” from one of FEMA’s programs, because these are designed to provide funding to return a property to its previous condition.

“Officials from one state explained that districts must adequately document the condition of the building to prove that damage was caused by the disaster rather than neglecting to make an earlier needed repair, such as fixing a leaking roof,” the report states. “Poorer districts and those with fewer resources often do not have sufficient staffing or expertise to maintain the necessary maintenance records, according to these officials.”

Additionally, four out of the five districts that spoke with GAO said their district was still in the process of its physical recovery, “in some cases, years after the natural disasters.” Some of these districts told GAO they were forced to use temporary facilities, which also disrupted students’ learning.

“For example, in one district multiple classes had to share one classroom space, while in another district, a temporary facility lacked adequate Wi-Fi, requiring students and staff to rely on physical materials, according to district officials,” the report says.

House Education and Labor Committee Chair Bobby Scott, D-Va., said in a statement: “This GAO report confirms what we have long known: Schools in vulnerable communities do not have the support they need to keep their facilities safe for students and staff.”

“The COVID-19 pandemic and recent natural disasters nationwide have been powerful reminders that our public school buildings are in urgent need of repair; however, we cannot expect schools to prepare for our changing climate or recover from future disasters without dedicated federal funding for school infrastructure,” he added.