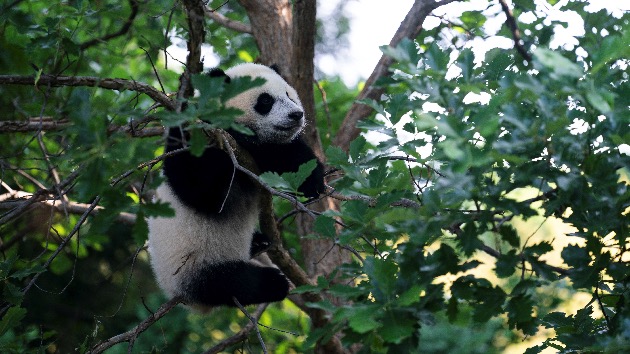 Xiao Qi Ji, the Smithsonian National Zoo’s newest giant panda cub, makes his public debut Friday after being born last August to his mother, Mei ­Xiang, who was considered too old, at age 22, to get pregnant.

Up to now, because of the coronavirus pandemic, fans have only been able to catch a glimpse of the cub playing and snoozing on the zoo’s panda cam — but with the zoo reopening Friday for the first time since last November — they now can watch him perform outside, likely climbing, rolling around and munching on panda-favorite bamboo.

The cub (his Mandarin name is pronounced SHIAU-chi-ji) weighs about 45 pounds, zookeepers say, a long ways from the tiny, squealing “stick of butter,” as cubs are called at birth.

“Theres no denying that a giant panda is a charismatic animal, this is a huge success story,” zoo spokesperson Pamela Baker-Masson told ABC News when he was born nine months ago to the day. “We have millions of people watching our panda cam program every year around the world.”

The public got to pick Xiao Qi Ji’s name back in November and, as part of a cooperative agreement with China to breed the “vulnerable” species in their native land, he will be returned there when he’s 4 years old to join his three siblings: Bei Bei, Bao Bao and Tai Shan.

Until then, to the delight of tens of thousands of tourists, he’ll be the zoo’s star attraction, and the focus of possibly a million impossibly cute photos.