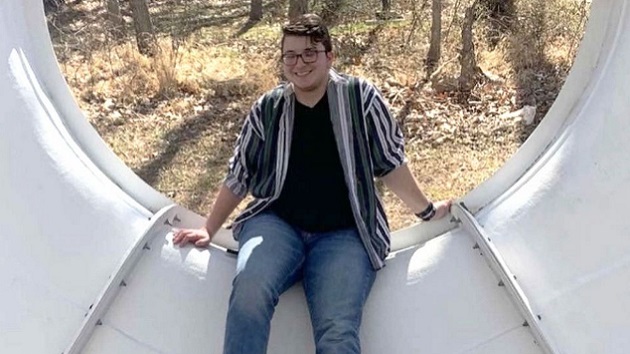 (NEW YORK) — When Jace Dulohery started school at Oklahoma Christian University in 2020, no one knew he was transgender. He had already begun to medically and socially transition, and no one questioned him living in male housing his freshman year.

However, when he opened up to a resident assistant about being trans that year, the information made its way up the administrative ladder at the school, which is affiliated with the Churches of Christ.

Eventually, he said he was forced to live in private housing.

“There’s just no room for a normal college experience when there’s actual discrimination happening,” Dulohery told ABC News. “This is not Christian behavior. This is not loving. This is not merciful. This is not compassionate. This is not of God. This is harmful.”

Dulohery filed a Title IX complaint about the decision to move his housing, and a Title IX panel agreed that his housing had been moved due to his gender identity. It also found that he was denied entry into a male-only social club for being transgender.

However, nothing has been resolved, Dulohery said. Instead, he said the school offered to pay for therapy.

Dulohery said the university’s legal team cited the religious exemption to Title IX, a federal law that prohibits sex-based discrimination, as the basis for its actions. It’s just one way that he says the school has become increasingly hostile against LGBTQ people on campus.

He, other LGBTQ students and allies hope that the ongoing national debate about LGBTQ discrimination in education can push their movement forward and put an end to Title IX’s religious exemption.

Advocates say the exemption claimed by Oklahoma Christian in certain circumstances, and which is claimed by more than 100 other universities, allows schools to partake in legalized discrimination against LGBTQ people, even while federal law otherwise prohibits it.

They also say that the exemptions reinforce a particular view of Christianity that they say is not reflective of the faith as a whole.

Title IX and the regulations that implement it state that religious institutions do not have to abide by the law if it would be inconsistent with the organization’s religious beliefs, according to the U.S. Department of Education. This is true even if the school has taxpayer funding.

Schools don’t have to apply for an exemption, however, however, a written claim or “request” can be submitted for assurance that the exemption will be legal and acknowledged by the DOE, according to the department. They must comply with Title IX otherwise, except for the aspects that are explicitly prohibited by their religious beliefs.

The agency can deny a school’s claim if it doesn’t believe its actions are within the religious tenets. Even if a school has a religious exemption, students can still file complaints against schools for discrimination, the education department said.

There are more than 100,000 LGBTQ students attending religious colleges and universities across the U.S., according to the LGBTQ advocacy group the Religious Exemption Accountability Project (REAP).

Oklahoma Christian has submitted a request for assurance of religious exemption under certain conditions more than once, according to the documents on the Department of Education website.

The school also filed a notice of religious exemptions for certain policies, such as housing and admissions, after the DOE clarified transgender people are protected by Title IX in 2014. Both were granted.

The letter listed passages from the Old and New testaments interpreted to be against homosexuality or transgender identities. Churches of Christ is a set of autonomous organizations that share similar beliefs about Christianity.

“Universally, Churches of Christ believe that all sexual relations outside of a heterosexual marriage covenant, are sin,” read the 2014 letter to the Department of Education from university President John deSteiguer.

“Churches of Christ would oppose a person’s attempt to modify his or her birth sex and present as a sex other than his or her original birth sex, and we’ll consider one who does so misguided and a disruptive presence,” deSteiguer stated.

OC does not explicitly ban LGBTQ students from attending.

Other alleged instances at Oklahoma Christian

Dulohery’s complaint is not the only instance of alleged discrimination described by students, faculty and alumni interviewed by ABC News.

At least one faculty member and one staff member say they have been fired or resigned for supporting the LGBTQ community in some fashion.

Michael O’Keefe, who was a tenured art professor at the university for about 40 years was fired after inviting a gay man, former OC professor and alumnus Scott Hale, to speak to his class in an annual speaker series.

Hale spoke about religious trauma and growing up as a gay man, according to O’Keefe, Hale and students.

He gave a trigger warning before the talk and told students they could leave at any time if they felt uncomfortable, both Hale and O’Keefe said.

O’Keefe told ABC News no students complained to him about the lecture and that he was fired less than a week after the speech.

However, in a memo to staff about O’Keefe’s firing given to ABC News, the school stated: “The employment termination process was prompted by multiple complaints from eyewitnesses or others aware of the inappropriate and graphic language of a sexual nature, and stories shared in O’Keefe’s class.”

The memo continued, “Some of the speaker’s remarks included telling the class about his history of exposing his genitals to others.”

In the letter, the university said the decision was not based on Hale’s sexual orientation.

O’Keefe and Hale both denied this to ABC News, saying that the “exposing his genitals” anecdote was taken out of context, and the speaker was discussing an incident when he was 10 years old at a slumber party. Both men said they believe O’Keefe was fired because Hale is a gay man.

O’Keefe is considering filing an appeal over his firing with the university.

The calls for change at OC are not an anomaly.

Students at Christian schools across the country recently filed a class-action suit against the U.S. Department of Education for alleged discrimination they say they have experienced as a result of religious exemptions.

The lawsuit, filed in Oregon federal court in March 2021, aims to “put an end to the U.S. Department of Education’s complicity in the abuses and unsafe conditions thousands of LGBTQ+ students endure at hundreds of taxpayer-funded, religious colleges and universities.”

The Religious Exemption Accountability Project is behind the lawsuit.

It states that if plaintiffs win, the DOE would have to treat Title IX complaints from sexual and gender minorities at religious universities with taxpayer funding in the same manner as it does with complaints from non-religious colleges.

Its director, Paul Southwick, says it’s been a long time coming for this anger to reach a boiling point in places like OC.

“There is a significant human cost to religious exemptions,” Southwick said. “Exemptions essentially mean that no matter how great the harm is that you commit, there is no accountability for it.”

Although the DOE is the named defendant, students seeking to be part of the class action describe alleged discriminatory treatment at various Christian universities.

The lawsuit represents 33 LGBTQ students and alumni from various religious colleges and universities from across the country.

“What we see is LGBTQ+ students being sent into conversion therapy,” Southwick said. “We see students expelled, disciplined, stripped of leadership positions. We see pervasive harassment that goes unchecked” at some Christian universities.

He continued, “We see students who experience sexual assault unable to report that assault if it involves someone of the same sex or would reveal their gender identity. Because they could then be disciplined for that in the course of reporting an assault” in some cases.

The Council for Christian Colleges & Universities, an organization of evangelical Christian institutions, denounced the lawsuit as an infringement on religious freedoms.

“The Title IX religious exemption has proven indispensable as contemporary notions of sexuality and gender depart, often substantially, from the religious beliefs that animate every aspect of Christian campus life,” said the CCCU in a court filing to join the litigation as a defendant, since the group would be affected by the outcome.

It continued, “Removing Title IX’s religious exemption, as applied to LGBT students or otherwise, will deprive religious colleges of the oxygen that gives them life by forbidding them, on pain of losing federal assistance for their students, from teaching and expecting adherence to their core religious beliefs.”

In June 2021, the Justice Department wrote in a court filing that it would defend the DOE and the exemption. Several motions to dismiss the case have been filed.

The DOE declined ABC News’ request for comment and pointed to the DOJ’s response.

Promise to ‘end the misuse’ of exemptions

The Biden administration made a campaign promise to “end the misuse of broad exemptions to discriminate,” according to his campaign website. Those against Title IX exemptions have applauded Biden and have used it as momentum for their cause.In 2021, the DOE clarified that Title IX covers discrimination based on sexual orientation and gender identity.

“There has been this work to try to say: to be religious, to be Christian is to be anti-LGBTQ,” said Ross Murray, a deacon and vice president of LGBTQ media watchdog GLAAD Media Institute.

He continued, “They wanted to claim a generic Christianity that they can use and mold to reinforce the existing biases and prejudices and help to bolster their discrimination.”

As OC students and faculty continue to work toward addressing allegations of discrimination on their own campus, the effort nationwide against anti-LGBTQ sentiment continues.

They say accountability will save the lives of LGBTQ students, who suffer under such policies.

“People have always been mad about the way the school has been treating them. And now inside and outside ears are listening,” Dulohery said. He said plans are in the works for in-person action against the school from students and allies alike.