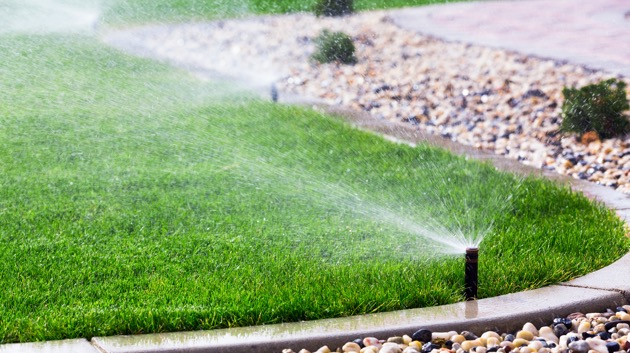 Among the calls to action is a reminder for residents to make choices that lessen use of municipal water when it comes to maintaining landscaping in desert surroundings.

About 30% of water usage for the average American family is used for the outdoors, such as watering lawns and gardens, according to the U.S. Environmental Protection Agency.

But in the West, where water is zapped almost instantaneously by either the blazing sun or thirsty vegetation, outdoor water usage increases to about 60% of total household use, according to the EPA.

While water is “pretty cheap” in the U.S. at the moment, that could change as the commodity becomes more precious, John Berggren, a water policy analyst with conservation organization Western Resource Advocates, told ABC News.

However, experts say they have noticed a societal shift in how people in the West approach everyday decisions to protect the precious water supply, including when it comes to how to design lawns.

Landscaping should match the environment

In the summer, a “big chunk” of the water supply in the West goes to irrigating non-native turf grass, which is what is generally used for lawns, Berggren said.

There are benefits to turf grass, Berggren pointed out. It’s aesthetically pleasing and cooling — which helps reduce the urban heat island effect — and it offers functionality for recreation, for kids and pets to run around in and as parks and ballfields. Grasses native to the West don’t offer the same recreational functionality.

The typical grass used for homes and ballfields is Kentucky bluegrass, which is not native to the West, which is why it requires so much water for upkeep, he said.

A solution is to remove the turf grass. While people often think ripping up turf grass means replacing it with cement, the best move is actually to replace it with live vegetation that is native to the area, such as shrubs and trees, Berggren said.

“We have so many beautiful native plants that are adapted to our climates out here in the West,” he said. “You’ll have lots of color. You can have lots of green.”

Once established, native plants require little water “beyond normal rainfall,” according to the EPA.

Along with the aesthetics, the plants will also provide collection for storm water runoff and water quality benefits, Berggren said.

Development codes enacted in municipalities around the West between the 1960s and 1980s had little to no restrictions on how much turf grass property owners could install. But officials and scientists are starting to rethink the approach to turf grass as the decadeslong drought worsens and populations increase, Berggren said.

However, the cost to transform lawns can’t be overlooked. Adding native plants for a xeriscaping project, or designing the landscape to reduce irrigation, can cost up to $5,000, according to home and garden blog Happy DIY Home.

Water providers and conservation programs are incentivizing homeowners to get rid of their turf grass, with some offering between $1 and $3 per square foot to replace it with native plants, Berggren said.

“And so if you’re replacing a couple 1,000 square feet of turf, suddenly, that’s a pretty big incentive to do so, and you can pay for a lot of the project with that program,” he said.

Turf buyback programs have become so important that states are providing the funds to maintain them.

Last month, Utah Gov. Spencer Cox announced the expansion of a statewide turf buyback program as one of four efforts to conserve water amid the megadrought.

Municipalities and states are also starting to realize that not all areas where there is turf grass are equal, Berggren said. Plots of land where the turf is purely ornamental, such as median strips on highways, are known as non-functional or non-essential turf, and states in the West are starting to do away with them.

For example, if a patch of grass in southern Nevada is green, that means it’s being irrigated with municipal drinking water, Bronson Mack, public information officer of the Las Vegas Valley Water District, said.

“The one thing to really keep in mind is whether or not those communities are irrigating that grass with water resources, or is that grass just getting naturally irrigated from precipitation,” Mack said. “Here in Southern Nevada, we’d only get 4 inches of rain a year. So, it is not enough water to sustain our outdoor landscaping.”

Lawmakers in Nevada recently passed a law banning non-essential turf in the Las Vegas region served by the Southern Nevada Water Authority. Assembly Bill 356 requires grass at non-residential properties to be ripped out within five years. After Dec. 26, 2026, those properties will no longer be able to irrigate non-functional turf with Colorado River water supplied by the water authority, Mack said.

“So their options are to find a new water source, which is pretty challenging to do,” Mack said.

The new legislation is the first of its kind in the country, he added.

More communities are also instilling caps on how much of any given property can contain turf grass, such as 20%, Berggren said.

The new laws are paralleled by a cultural shift to make people re-think how they use their yards. If they find they only use the backyard, the incentives motivate them to replace the grass in the front yard with native plants, Berggren said.

Prior to the early 2000s, homes in Nevada state had wall-to-wall grass, but 20 years later, landscapes in new developments have no grass and use water-efficient material instead, Mack said, adding that nearly 70,000 residential and commercial landscaping projects to remove more than 200 miles of grass have taken place in Southern Nevada alone since then.

“That’s why it’s good to see so many homeowners kind of being proactive in like ripping up their front lawn and putting in nice, beautiful, native vegetation, because then their neighbors see it, and then people driving down the street see it,” Berggren said.

Communities across the Southwest have embraced the trend to transform lawns to be water-efficient, Jay Lund, professor of civil and environmental engineering at the University of California, Davis, and the head of the school’s Center for Watershed Sciences, told ABC News.

Water-efficient irrigation techniques can reduce water usage by up to 15%, according to the EPA.

Something as simple as replacing sprinkler heads can upgrade irrigation systems to save a significant amount of water, Berggren said.

It is not necessary to water grass every day, according to the EPA, which recommends testing the lawn by stepping on a patch of grass instead. If the grass springs back, it does not need water, the agency says.

Better Homes & Gardens recommends that homeowners in the region let lawns brown during the summer, or give them about 1 inch of water per week.

Do not water lawns during the afternoon, as the water will evaporate before the drops even hit the ground. Water lawns early in the morning instead.