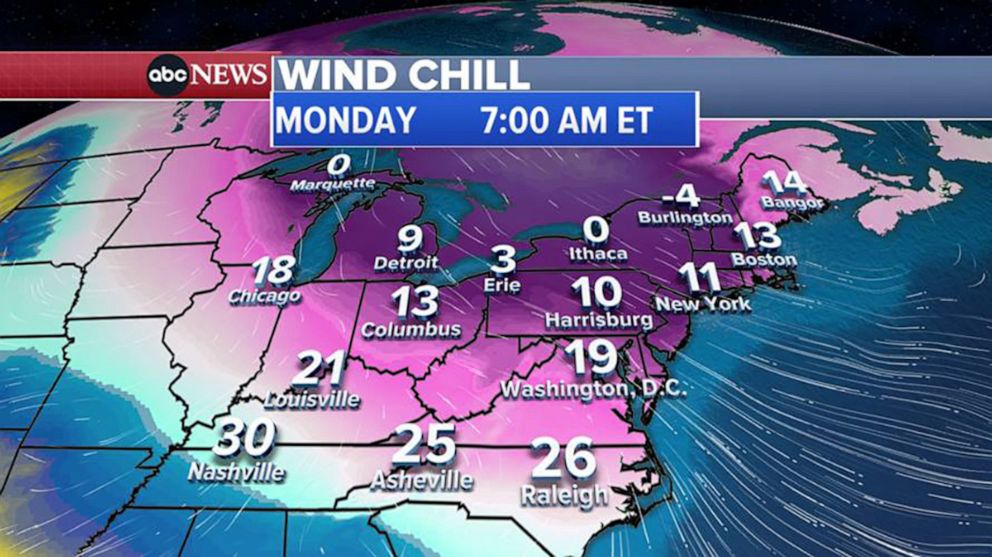 (NEW YORK) — A cold blast continued through Tuesday morning in the Northeast and eastern Great Lakes as the late season arctic air mass moved through the region with the wind chill hovering in the teens and singles digits. This airmass was so unseasonably cold for this time of the year that on Monday there were dozens of record cold high temperatures from New York City to Boston.

The arctic air mass sparked very intense lake effect snow squalls reducing visibility to less than a quarter of a mile with gusty winds and whiteout conditions. Some areas in western Pennsylvania and New York got 10 to 12 inches of snow from the lake effect snow.

Tuesday morning could potentially be the last cold morning for the Northeast, as a major warm up is expected with temperatures rebounding into the 60’s and near 70 by Thursday for most.

A new storm coming out of the West with severe weather outbreak is to be expected within the next several days across the South and into the Northeast and Mid-Atlantic states. This storm already brought heavy rain and minor flooding to southern California with heavy snow to the mountains.

Severe weather begins in the Plains Tuesday night from Dallas to Oklahoma City, Kansas City, Missouri, and Des Moines, Iowa. Damaging winds will be the biggest threat for these cities but a few tornadoes cannot be ruled out.

Wednesday afternoon, the second highest risk for severe weather has been issued across the South including Alexandria, Louisiana; Jackson, Mississippi; and Memphis, Tennessee, with a possibility of strong tornadoes and damaging winds in excess of 75 mph.

Severe weather on Thursday moves into the I-95 corridor from Washington, D.C., to Philadelphia and just south of New York City, where damaging winds are expected, but an isolated tornado cannot be ruled out.

Texas restaurant owner takes down alligator on his front porch