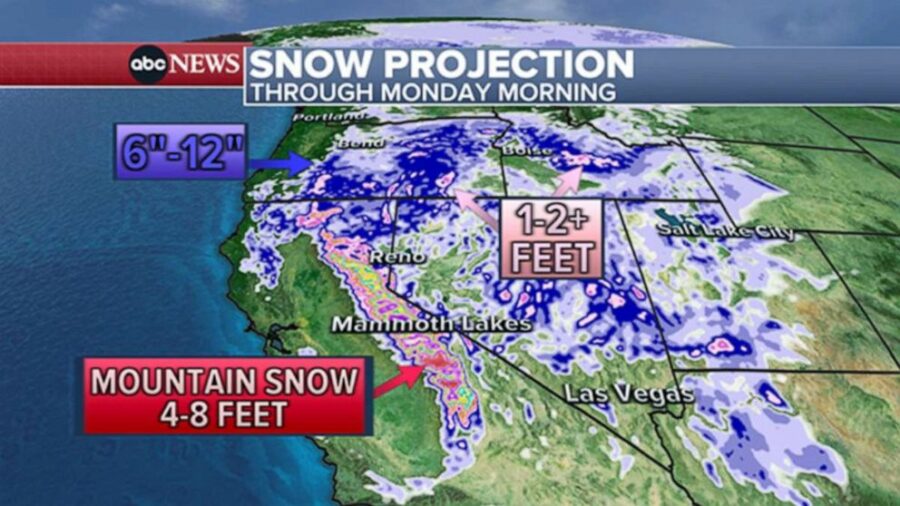 (NEW YORK) — A large and powerful storm is making its way onshore from the Pacific Ocean on Saturday, bringing a range of hazards to the west over the weekend.

This storm is already in progress in Washington, Oregon and northern California. The storm will drift south during the day on Saturday, with heavy rain moving as far south as Los Angeles and San Diego heading into Sunday.

One to 2 inches of rain are likely across a wide area of the west coast, with some localized patches of 2-4 inches possible. With that kind of rain in a relatively short period of time, flash flooding will be a risk across coastal California throughout the weekend.

Storm totals may end up leaving as much as 4 to 8 feet of snow in some of the Sierra Nevada Mountains in central-northern California.

There will not be extreme snowfall in the lower elevations, where most cities are located, so don’t expect to see any snowfall in Sacramento or the rest of the San Joaquin Valley.

The storm then heads east into next week, expanding in size. By Tuesday, it may stretch from the Gulf Coast to southern Canada — more than 1,500 miles long.

By Tuesday, there are two main concerns: blizzard conditions in the northern plains and severe weather in the Deep South.

Heavy snowfall and gusty winds will lead to whiteout conditions from Nebraska to Minnesota on Tuesday and Wednesday. While the other side of the storm will bring a chance for powerful thunderstorms and tornadoes in Louisiana, Arkansas and Mississippi on Tuesday.

Sunday snow in the Northeast

A smaller, less powerful storm system will be heading through the Great Lakes and into the Northeast on Sunday. While not a giant storm, it will bring portions of the Northeast the first accumulating snowfall of the season.

Snow will mix with rain along the coastal areas, so the major cities along the I-95 corridor, Philadelphia, New York and Boston, aren’t looking at much, if any, snow accumulation.

Travel on Sunday evening may be tricky with snow and rain across the area. It all clears out by Monday.