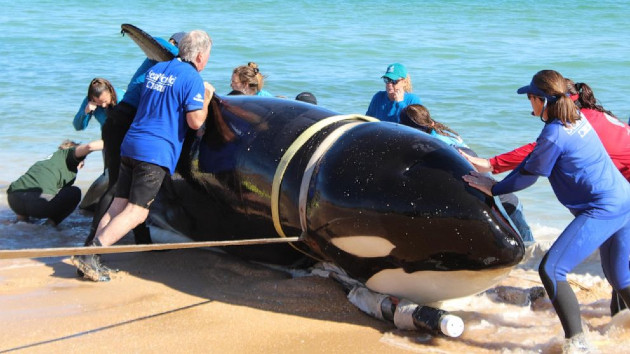 The incident occurred early Wednesday morning at the south end of Jungle Hut beach in Flagler County, Florida — approximately 30 miles north of Daytona Beach — when a 7,000 pound female orca washed ashore, according to an announcement made by the Flagler County government on social media.

It is thought that the whale was alive when it beached itself but eventually lost its life when it couldn’t make it back into the sea.

Authorities said that SeaWorld will be performing a necropsy to establish the killer whale’s cause of death following the incident.

Dozens of people were needed to help remove the whale from the beach and authorities even had to close the road to the beach due to gathering crowds who came to watch the spectacle.

“We want to thank our Flagler County staff who came together in order to assist SeaWorld as they moved this 7,000lb whale off the shore and on the road to Orlando,” read a statement posted on the Flagler County government’s Facebook page. “Our Public Works Department swiftly brought multiple pieces of equipment to the beach to assist the workers with getting the whale off the shore.”

Flagler County officials had to use a bulldozer, compact loaders and manpower from several dozen people to get the whale onto land and off of the beach.

“Our Flagler County Fire Rescue members from B Shift, Station 41, and members of our marine rescue unit were in attendance to assist with heavy lifting and were on the scene in case of any medical emergencies with SeaWorld staff,” said the Flagler County government. “Whitney Labs, Marineland staff, Flagler County Sheriff’s office, and Florida Fish and Wildlife were also on the scene assisting.”

Killer whales are found in all oceans around the world but are “most abundant in colder waters like Antarctica, Norway, and Alaska,” according to the National Oceanic and Atmospheric Association (NOAA). “They are also found in tropical and subtropical waters.”

The global population of killer whales is estimated to be around 50,000 and the average lifespan for a female killer whale is around 50 years but they can also live up to at least 90 years in the wild, according to the NOAA.