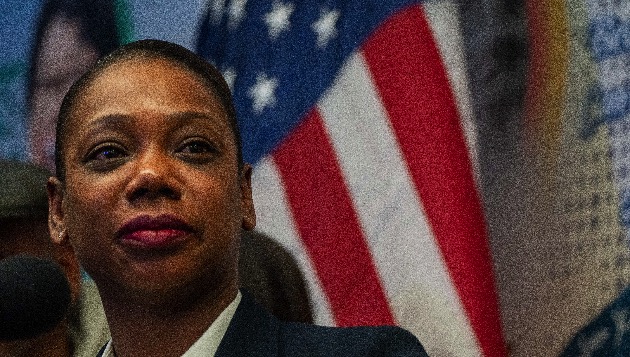 (NEW YORK) — Keechant Sewell will become the first female police commissioner of the NYPD, the largest police department in the country.

“To all the little girls within the sound of my voice there is nothing you can’t do and no one you can’t become,” Sewell said at a press conference. “It is said the NYPD is the best of the best. We’re about to get even better.”

Sewell, 49, is the first woman to lead the NYPD in its 176-year history. She is the department’s third black commissioner.

She will take charge of the department that has successfully driven down crime in recent years but is seeing a spike in certain violent crimes during the pandemic era. Sewell plans to seek a balance between crime-fighting and police reform.

The announcement came at the Queensbridge Houses in Long Island City where Sewell spent her early life.

Adams, a former police captain himself, had promised to choose a woman and was known to interview a number of executives including former Seattle Police Chief Carmen Best, Philadelphia Police Commissioner Danielle Outlaw and the NYPD’s current chief of patrol, Juanita Holmes.

Since 2020, Sewell has been the chief of detectives at the Nassau County Police Department on Long Island, where she has been on the force for 25 years.

Adams praised her “full breadth of experience” and said his choice should send a message to girls: “There is no ceiling to your ambition.”

The Police Benevolent Association of the City of New York, the municipal police union for the NYPD, has welcomed Sewell to “the second-toughest policing job in America.”

“New York City police officers have passed our breaking point,” said PBA President Patrick Lynch. “We need to fix that break in order to get our police department and our city back on course. We look forward to working with her to accomplish that goal.”

The Legal Aid Society, the oldest and largest provider of legal aid in the U.S., said Sewell can bring a new approach to an agency that is in need of “top-to-bottom reforms.”

“The next Commissioner must demonstrate an understanding that many community problems do not warrant a law enforcement response; that police misconduct must be taken seriously and addressed swiftly; and that tackling some of our city’s most pressing public safety issues, especially gun violence, requires full funding for proven, community-based approaches, including the CURE Violence model, and not a knee-jerk resort to the failed, aggressive and racist approaches of the past,” the Legal Aid Society said in a statement.

The organization also called on Adams to fix the criminal justice system: “The Commissioner must also immediately meet with community members to build real and meaningful pathways to input and accountability … we look forward to turning the page with Mayor-elect Eric Adams and Keechant Sewell in hopes of making New York a more fair and just city for the clients and communities we serve.”