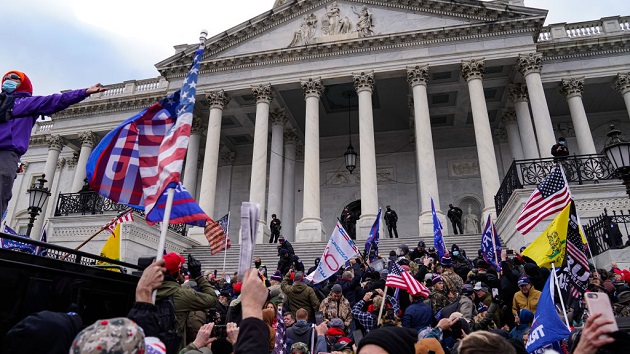 Webster’s trial marks the fourth time a jury has heard a Jan. 6 defendant’s case, with all four cases resulting in convictions on all charges.

Webster was found guilty of assaulting D.C. Metro Police Officer Noah Rathbun, who testified at the trial — as did Webster himself, who often spoke directly to the jury and called Rathbun as a “rogue cop.”

According to testimony and video of the riot, Webster pushed through a crowd toward bike racks that were acting as a police perimeter. Clad in a bulletproof vest and waving a Marine Corps flag, he arrived at the front of the crowd, yelling “commie mother——-” at the officers, before zeroing in on Rathbun and yelling. “take your s— off!”

“That’s what people say when they want to fight,” Rathbun said during his three-hour testimony. “It’s very common.”

Webster swung a metal flagpole in a downward motion twice before breaking apart the bike racks. As Rathbun backed away, Webster ran toward him and tackled him, then pulled at his gas mask. Rathbun began to choke on his chin strap as Webster pulled at the mask, Rathbun testified.

Video shows that Rathbun hit Webster’s face while trying to push him away, which became a cornerstone of Webster’s defense. Webster, who claimed that Rathbun had provoked the fight, said that he pulled at Rathbun’s mask as a form of self-defense.

“I felt like I was the cop and he was the protester,” Webster said on the stand.

U.S. attorneys said that Webster clearly should have known he was not allowed on Capitol grounds, pointing to the snow fencing, the bike racks that formed a police barrier, and the Metro Police’s riot gear, flash bangs and tear gas. He also should have known, they said, through his 20 years as a New York City police officer.

“Thomas Webster and Officer Rathbun both swore oaths to protect the country. But only one of them actually fulfilled that oath on Jan. 6 at the U.S. Capitol,” a U.S. attorney said. “And that was Officer Rathbun.”

The defense said they wanted the jury to see the “whole truth.”

“When are acts of police misconduct acceptable?” defense attorney James Monroe said. Referring to the flagpole, Monroe said, “Sometimes, a flagpole is all it is. It’s all it was.”

Sentencing is set for September 2. Judge Amit Mehta ruled that Webster does not have to be held in custody prior to sentencing.