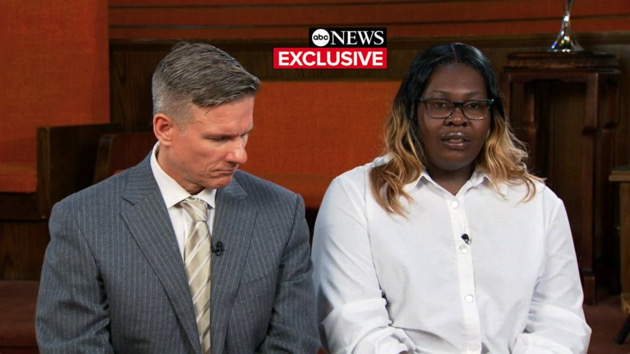 (AKRON, Ohio) — Jayland Walker’s sister wants the world to know him as she did: a funny, kind brother who looked out for his family and had big goals for his future of investing and buying a home.

“It’s hard to just talk about somebody who you expect to live your life out with,” Jada Walker told Good Morning America.

Jada opened up about her relationship with Jayland in her first interview since the body camera footage of his death was released. She said her brother always made time to reach out and connect with her and their mother. On Sundays — “family day,” as Jada calls it — they would get together.

“If it ain’t a movie, we just listening to new music,” she said. “We both have our own lives, but we always made sure to check in with each other.”

Jayland Walker was unarmed when eight Ohio officers opened fire on him on June 27, fatally shooting him after a traffic stop turned into a pursuit.

Jada has yet to make sense of the events that unfolded, ending in her brother’s death. She has yet to look at the body camera footage of his death.

She says hearing sirens or seeing vehicles that look like Jayland’s silver Buick is triggering for her.

“I just want to know, what was the reason? Why you had to resort to him being gunned down in such a manner?” she said.

The release of body camera footage of his June 27 death has reopened wounds for Jada, who says she still doesn’t understand what went wrong.

“None of this is making sense to me,” Jada said.

Officers said they attempted to pull Jayland Walker, a 25-year-old Black man, over for a traffic and equipment violation when he refused. It turned into a car chase, as police continued to pursue Jayland Walker.

Officials said the muzzle flash of a gun came from the driver’s side of Jayland Walker’s car, while officers in another video said they heard at least one shot being fired from his car. The lawyer representing the Walkers, Bobby DiCello, said his team is looking into these claims.

“There’s no video of him pointing the weapon out the window or out the door, and there’s no bullet holes in the car,” DiCello told GMA. “The conversation about whether there was a shot needs to happen. We’re not sure that there was a shot.”

According to body camera footage, Jayland Walker slowed down and exited the vehicle from the passenger side door, running away from officers. He was killed by a barrage of dozens of bullets as he was running, DiCello said. In total, eight officers fired at him several dozen times, according to the attorney.

He was unarmed when he was fatally shot. Police say they recovered a handgun with a separate loaded magazine and what appears to be a gold ring left on the driver’s seat of Jayland Walker’s car.

DiCello also said a preliminary autopsy report that his team reviewed found that the gun was initially recovered in the backseat.

“I need to know how the gun got in the front seat,” he said. “All nicely presented with the ring in the car. The cartridge pulled out and the bullets there. This looks like a staged picture.”

The State Attorney General’s Office did not respond to ABC News’ request for comment on this allegation or the incident.

DiCello said a lack of dashcam footage from police vehicles has left many of the early parts of the exchange unclear, including the initial attempt at a traffic stop. DiCello said that Akron police do not use dashcams on their vehicles.

Jada said she grieves not just for Jayland, but for other Black men who are victims of police violence.

“Many black men who have been killed and many families who experience this … it’s really hard,” she told GMA. “I’ve been saying to myself: in time, it’ll get better. Just looking forward to the future and hoping that we get the right answers and out of answers, just getting justice for him as my main priority.”