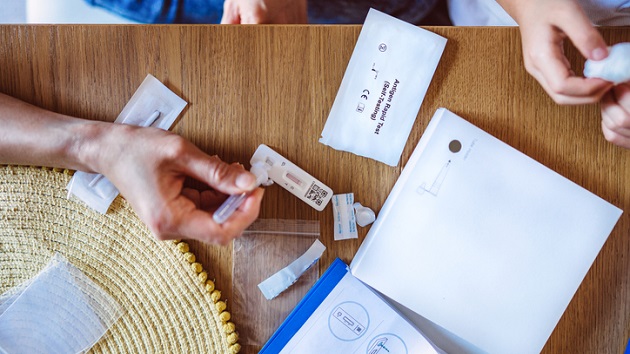 (WASHINGTON) — President Joe Biden turned heads Sunday night when he declared the COVID-19 pandemic is “over” even while stating the United States is still having a “problem” with the virus.

“The pandemic is over,” he said during an interview on CBS’ “60 Minutes.”

Biden continued, “We still have a problem with COVID. We’re still doing a lot of work on it. It’s — but the pandemic is over.”

His comments come a few weeks after the Centers for Disease Control and Prevention updated its guidance for unvaccinated people exposed to COVID.

Data from the federal health agency shows that hundreds of COVID-19-related deaths are being recorded every day and that around 14,000 Americans died from the virus last month.

Public health experts told ABC News that that pandemic is not over yet and that Biden’s comments may be a bit premature.

“The pandemic is emphatically not over,” Dr. Peter Chin-Hong, an infectious diseases specialist at the University of California, San Francisco, told ABC News. “I would highlight the first [reason] is number of deaths per year.”

“That’s several-fold higher than a typical flu season,” Chin-Hong said, with an average of about 35,000 deaths per year from the 2010-11 flu season to the 2019-20 flu season, according to an ABC News analysis of CDC data.

He said if the annual COVID death toll continues to remain high, “it would be way higher than diabetes, other respiratory illnesses. That number is not insignificant at all.”

That’s the highest seven-day average reported in the country since Sept. 4.

“My concern about all of this is that when you say the pandemic is over, that becomes synonymous with there’s no disease,” Dr. Perry Halkitis, dean of Rutgers School of Public Health, told ABC News. “But we know there’s disease that very much exists in the United States still making people sick and still killing people. It could be troubling because of the increase in respiratory illness in the fall season.”

During a press conference last Thursday, the World Health Organization’s director-general, Tedros Adhanom Ghebreyesus, said the end of the pandemic was “in sight.”

“Last week, the number of weekly reported deaths from Covid-19 was the lowest since March 2020,” Ghebreyesus said. “We have never been in a better position to end the pandemic. We’re not there yet, but the end is in sight.”

“So endemic means sort of normal amounts of cases … for the foreseeable future, COVID is here to stay and we should expect some COVID cases,” Dr. Dana Mazo, an infectious diseases specialist and clinical associate professor of medicine at NYU Langone Health, told ABC News. “What we’re seeing is that COVID is around and we all have to learn to live with it.”

This is especially important as the U.S. heads into the fall and colder weather months when cases traditionally begin to rise and new variants appear.

Experts fear people will not follow mitigation measures and states and cities may not be willing to reinstate measures if a surge occurs.

“We’re not in as bad a place as we have been in the past, which is good,” Dr. Julia Raifman, an assistant professor of health law, policy and management at Boston University School of Public Health who researches state-level policy responses to the pandemic, told ABC News. “But I remain very concerned that we are not prepared for surges of new variants. And that we are likely to have a high cumulative toll, almost all of it preventable.”

“Just being ready to turn those on when there’s a surge of a new variant will be very helpful, but there’s no readiness for that right now,” Raifman continued.