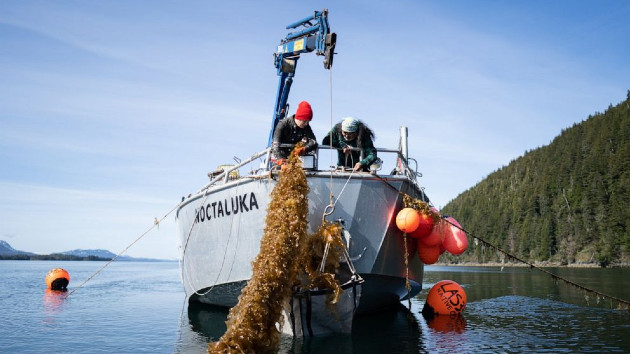 The 1989 spill, considered one of the most devastating environmental disasters in U.S. history, destroyed the livelihood of local Indigenous fishermen, local food sources, as well as the natural habitats of local fish, whale and bird species.

“The thing about the oil spill that a lot of people don’t realize is that was like climate change happening to us overnight,” said Dune Lankard, the founder of the Native Conservancy. The organization was born out of the devastation that the spill caused to the local economy and ecosystem.

The group was created by Lankard to protect the region from further devastation by corporate development. He’s just one of the many environmentalists who argue that Indigenous traditions and tools can turn the tide on climate injustice through the Land Back movement.

Indigenous people make up less than 5% of the world population, however, they have protected 80% of the Earth’s biodiversity for centuries, according to the World Wildlife Fund.

However, climate change and environmental injustices continue to threaten vulnerable populations, including Indigenous tribes. To combat this looming threat, Lankard and his team have cultivated rich kelp mariculture farms, which Lankard calls the “waterkeepers” of the ocean.

He says kelp farming not only supplies a valuable food source and business opportunities for tribes, but it has the ability to pull in and remove billions of tons of carbon dioxide from the atmosphere each year.

According to a panel by the science research nonprofit Energy Futures Initiative, kelp farms can sequester up to nine billion metric tons of carbon per year, essentially reversing the effects of climate change.

It’s become an exciting tool for climate activists and scientists alike in taking the fight against environmental destruction back into their own hands.

The more land and water Indigenous people can conserve and repair, the more they can implement climate-saving strategies such as kelp farming.

“What people have to do is: they have to organize, we have to direct their energy, their time, money or love in whatever direction they may need to, in order to save the last of the wild places that are not only dear to them, but they need in order to survive,” Lankard said.

What is the Land Back Movement?

The Land Back movement is a widespread, Indigenous-led effort to return land to Indigenous tribes to conserve, restore and revitalize important landscapes and biodiversity.

“We are calling for the return of land and putting it into indigenous land management or governance, so that we can really have indigenous-led conservation,” Jade Begay, the climate justice campaign director at the Indigenous activist group NDN Collective, said.

Ninety-nine percent of Indigenous lands have been taken from tribes over the development of modern-day America, according to 2021 findings in the Science Journal.

The research also found that the lands Indigenous people have been forcibly moved to are more likely to be at high risk to the ongoing effects of climate change.

The decentralized movement demands that tribes be able to manage environmental efforts on ancestral lands, efforts that can halt or reverse negative climate impacts.

Land Back has already begun to be successful. The government has begun to return and repatriate Native and Indigenous land to tribes.

Fones Cliffs is not only the ancestral land of the tribe, but also an important region for resident and migratory bald eagles and other birds. It’s home to one of the largest nesting populations of bald eagles on the Atlantic coast.

Now that the land has been reacquired, they hope to create trails and a replica 16th-century village to educate visitors about Rappahannock history and conservation efforts, as well as train tribal youth in traditional river knowledge.

“We look at the Mother Earth as our mother, and what would you do to harm your mother?” said Chief Anne Richardson of the Rappahannock Tribe.

“The work that I’ve done to get land back on the Rappahannock River is to teach the public how to think the way we think, how to utilize the incredible value systems that have kept our people sustaining on this land for 11,000 years,” she said.

The work of the Eyak people, the Rappahannock Tribe and more Indigenous groups seek to align with the goals of climate scientists as they continue the dire fight against a changing climate.

The most recent report from the United Nations Intergovernmental Panel on Climate Change found that global emissions will need to peak by 2025 at the latest, and steeply reduce thereafter, to prevent worsening impacts on the climate.

Right now, countries are not on track to limit global warming to 1.5 degrees Celsius, the conservative figure established by the Paris Agreement.

“If we wanted to really expedite and be efficient about decarbonization, honoring indigenous rights, honoring, calls to action for Land Back will really push us to meet those climate targets to meet that target of keeping temperatures from rising above 1.5 degrees,” Begay said.

Some of the efforts of the Land Back movement, which include water filtration, carbon sequestering and wildfire management can tap into the IPCC’s recommendations.

“I love it when tribal values and traditions validate what the professional scientists have found,” Richardson said. “It’s important for the tribes to be in the care of and to be able to train and teach the public on how to really care for the land and all of our natural resources.”

Much like the Eyak and Rappahannock Tribes, Indigenous groups across the country have already begun to do the work on the ground to save the planet — one river, cliff, or forest at a time.

Land Back as a climate justice solution

The impacts of the oil spill into the Copper River have yet to be completely resolved more than 30 years later.

Lankard called the $2 billion cleanup effort by Exxon after the oil spill “a dog and pony show.”

“Once the oil spill — any oil spill — hits the water, the war is over. You’ve lost. There’s no way you can clean it up,” said Lankard.

“The best thing you could possibly do is get environmental laws in place and preventive measures that will actually protect the environment,” he said.

He says efforts like the Land Back movement can prevent such disasters. Following the spill, Alaskan Natives were able to take control of and preserve more than a million acres of wild salmon habitat along the Gulf of Alaska coastline.

In the meantime, kelp farming has helped bolster the local economy thwarted by the oil spill, as well as provided an environmental element.

“We want to figure out how we can be a part of this new emerging regenerative industry and we don’t get owned by the corporations in this next 150 years,” Lankard said.

“They’re going to use all the fun words like conservation and restoration and mitigation and say that they’re the ones that are helping save the ocean when they’re the ones who got us into this mess in the first place,” Lankard said.