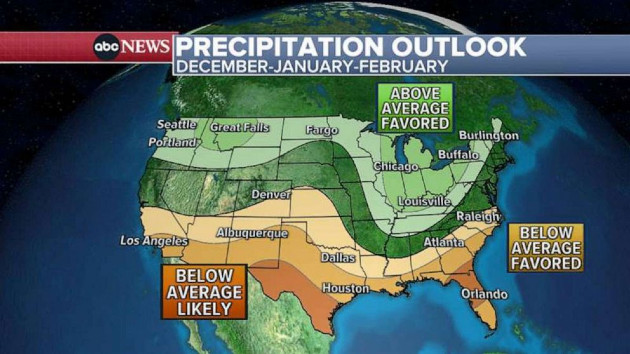 (NEW YORK) — California’s ongoing drought and a poor forecast is forcing the state’s water management agency to cut back on its fresh water supply to nearly 27 million residents.

The state’s Department of Water Resources announced Thursday an initial allocation of 5% of requested supplies for 2023 for 29 local water agencies across California.

DWR Director Karla Nemeth said in a statement that the state is already preparing for a fourth dry year and more extreme drought conditions. Lake Oroville, the State Water Project’s largest reservoir, remains at 55% of its average for this time of the year, according to the agency.

“This early in California’s traditional wet season, water allocations are typically low due to uncertainty in hydrologic forecasting, but the degree to which hotter and drier conditions are reducing runoff into rivers, streams and reservoirs means we have to be prepared for all possible outcomes,” Nemeth said in a statement.

DWR said it will “assess requests for additional water that may be necessary for health and safety including minimum domestic, sanitation, and fire suppression needs.”

The agency said it will reevaluate requests depending on the precipitation during the winter and spring months. California typically receives half of its rain and snow totals by the end of January, according to DWR.

Most of California has seen less than its average precipitation levels over the last 60 days, according to the National Integrated Drought Information System. Most of the state is under severe to exceptional drought warnings, the data showed.

“We are in the dawn of a new era of State Water Project management as a changing climate disrupts the timing of California’s hydrology, and hotter and drier conditions absorb more water into the atmosphere and ground. We all need to adapt and redouble our efforts to conserve this precious resource,” Nemeth said.