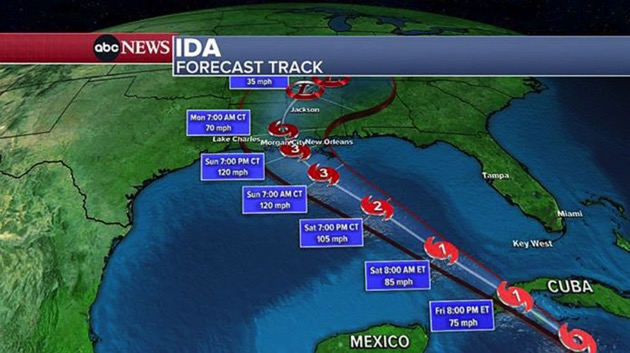 The storm is forecast to intensify and become a Category 4 hurricane with 140 mph winds before landfall in Louisiana late Sunday.

Currently, Ida is moving northwest at 16 mph and its center is located about 290 miles south-southeast of the mouth of the Mississippi River in southeastern Louisiana.

The National Hurricane Center issued a warning Saturday that “Preparations to protect life and property should be rushed to completion today” for areas under a hurricane warning.

“Ida is expected to be an extremely dangerous major hurricane when it reaches the coast of Louisiana. Hurricane-force winds are expected Sunday in portions of the Hurricane Warning area along the Louisiana coast, including metropolitan New Orleans,” NHC said in its latest update.

Satellite imagery is now showing a well-defined eye in the center of Hurricane Ida. Rapid strengthening is expected today and Ida will be a major category 4 Hurricane in less than 24 hours.

The latest forecast track has Ida coming ashore in southeast Louisiana on Sunday late afternoon/early evening as a Category 4 Hurricane.

Ida will be a tropical storm nearing the border of Mississippi by Monday morning.

On Saturday morning Ida crossed over western Cuba and entered the southern Gulf of Mexico, where it is expected to begin rapid intensification as it careens toward the Louisiana coast, according to the National Hurricane Center.

New Orleans Mayor LaToya Cantrell warned in a press conference Saturday, “If you’re going to leave, you need to do that now” or shelter in place.

She told locals to brace for damaging wind, heavy rain and tornadoes, saying, “I’m told that the storm in no way will be weakening.”

Collin Arnold, the city’s emergency preparedness director, urged people to be ready to shelter in place by midnight tonight if they intend to stay and ride out the storm and that extended power loss “is almost certain.”

At least 260 National Guard members will be on the ground in New Orleans by this evening, Lt. Col. Kenneth Baillie said Saturday.

Officials warned that Louisiana is much more prepared for Ida than it was for Katrina in 2005. Cantrell said she is “very confident” in a levee protection system that wasn’t in place back then.

Mandatory evacuations, for areas outside the levees, were ordered south of New Orleans, effective 3 p.m. local time Friday. In the rest of the parish, evacuations are voluntary.

“We’re not calling for a mandatory evacuation, because the time simply is not on our side,” Cantrell said Friday. “We do not want to have people on the road, and therefore in greater danger, because of the lack of time.”

Ida is forecast to reach major hurricane status and close in on the Louisiana coastline Sunday morning, making landfall between 5 and 11 p.m. By early Monday morning, Ida will rapidly weaken and move inland; however, much of Louisiana will still experience strong winds.

Louisiana Gov. John Bel Edwards said people who are evacuating should get to their destinations by Saturday evening.

“This could be a life-altering storm if you’re not prepared,” Edwards said at a Friday press conference.

“We need to take this storm very seriously. Now is not the time for jokes, for playing around,” Cantrell said. “We need to take it seriously, we need to reach out to our neighbors, our family members and our friends.”

Storm surge could reach 15 feet along parts of the Louisiana/Mississippi coastline and 6 feet on Lake Pontchartrain in New Orleans.

A storm surge watch is in effect along parts of the northern Gulf Coast, from Sabine Pass, Louisiana, through New Orleans to the Alabama-Florida border.

Some COVID-19 testing and vaccine sites are closing early Friday due to the storm, the Louisiana Department of Health said.

The high number of COVID-19 patients in Louisiana also means the state will not be able to evacuate hospitals, the governor said. Cantrell also said New Orleans hospitals were not being evacuated at this time.

“We’ve been talking to hospitals about making all the preparations possible to make sure that their generators are working, that they have way more water on hand than normal,” Edwards said.

Health officials are asking people to avoid emergency departments throughout the storm if possible.

Hurricane warnings and states of emergency have been declared in New Orleans and Louisiana.

Ida should weaken to a tropical storm by Monday, but it’s forecast to move inland across Louisiana, with more potentially devastating downpours. About 20 inches of rain are expected, which means extreme floods are possible.

President Joe Biden has approved an emergency declaration for Louisiana.

Biden is “closely tracking” the developments and will host a call with the Federal Emergency Management Agency administrator and governors of Louisiana, Alabama and Mississippi to discuss preparations, press secretary Jen Psaki said Friday.

The administration, Psaki added, also is working to free up hospital beds and pre-position resources, in addition to sending a search-response team, 50 FEMA paramedics and 47 FEMA ambulances to assist with care.

-ABC News’ Will McDuffie contributed to this report.