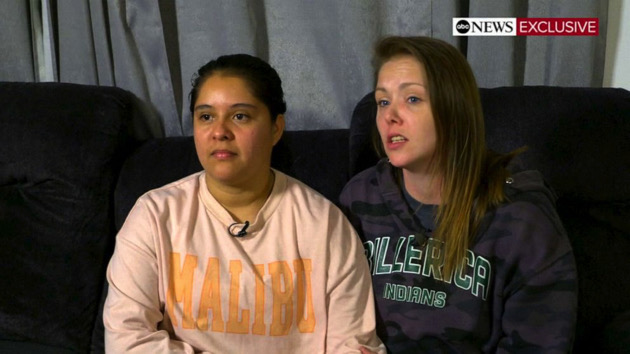 (BURLINGTON, Mass.) — As her alleged would-be kidnapper was set to appear in court, a Massachusetts mother spoke out about the terrifying random roadside attack and was reunited Wednesday with the good Samaritan who stopped to save her.

The suspect, Tyler Healey, 23, was arrested Tuesday after Burlington, Massachusetts, police released security video of what they described as a random attempted abduction that only ended when a passing female motorist intervened and called 911.

A judge ordered Healey to remain in custody pending a hearing next week.

The incident unfolded around 8:20 p.m. Sunday as the victim, 37-year-old Zayra Mendoza, was walking down a street in Burlington. The security video captured the attacker following Mendoza on foot, then quickly closing the gap between them and grabbing her.

The grainy black-and-white footage appears to show the assailant dragging Mendoza and ripping off her top as she tried to fight back.

Ariel Naylor said she was driving by in her SUV when she saw the assault in progress and called 911. Naylor said that when she slammed on her brakes and stopped, the attacker released Mendoza and ran away.

Mendoza and Naylor were reunited on Wednesday morning and in an exclusive interview with ABC’s Good Morning America, Mendoza said of Naylor, “God sent me an angel.”

Naylor said she didn’t hesitate to stop and help.

“I did what any person should do when you see somebody in trouble,” Naylor said.

Naylor applauded Mendoza for fighting and trying to stay in the light of street lamps so she could be seen.

“She knew to get to the light and to get to the side of the road so somebody could help her,” Naylor said. “So she made it possible for me to help her.”

In an earlier interview with ABC affiliate station WCVB in Boston, Mendoza recounted the horrifying ambush.

“When I looked, the man was right on top of me,” Mendoza said following Healey’s arrest in the Boston suburb of Winthrop, 21 miles south of Burlington. “I thought this man is going to rape me, going to kill me.”

Mendoza, speaking in Spanish as her brother interpreted, added, “I was screaming. I was trying to fight him off. I was running out of strength. He was dragging me by one arm.”

Mendoza said she thought of her 9-year-old daughter as she was being dragged off and wondered what would have happened to her had Naylor not stopped.

“Thanks to her, it all came to an end,” Mendoza said.

“The person who made that call really prevented this from being so much worse,” Ryan said.

Police are continuing to investigate if there are similar incidents involving Healey.