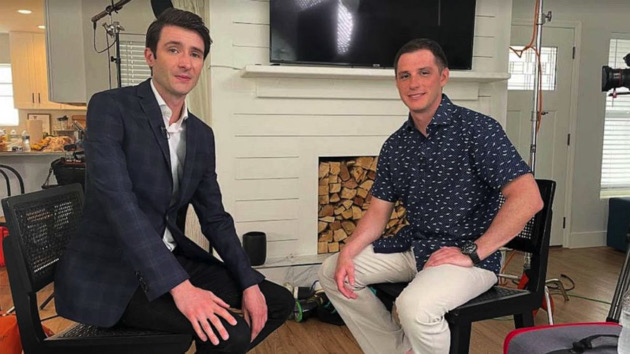 (NEW YORK) — When the war in Ukraine broke out in February, Trevor Reed said he believed it meant he likely would never come home.

The American former Marine by that time had been imprisoned in Russia for nearly three years, held hostage after being convicted on trumped up charges. For 985 days, Reed was held in a series of Russian prisons, thrown in isolation cells as small as a closet for 23 hours a day, placed in a psychiatric ward and sent to a forced labor camp he described as looking and feeling like something “out of medieval times.”

But within two months, Reed was home in the United States, freed on April 27 as part of a prisoner swap agreed between the Biden administration and the Kremlin. Reed was freed in exchange for Konstantin Yaroshenko, a pilot from Russia who was sentenced in 2011 to 20 years in prison for conspiring to smuggle cocaine into the United States.

Now back in America and with his family for the first time, Reed is trying to adjust to normal life.

“I’ve been hanging out with the family a lot, been trying to get used to being free again,” the former U.S. Marine told ABC News in one of his first interviews since being released. “That takes a little bit of time, that process. But I feel better every day.”

For more of the ABC News interview with Trevor Reed, watch the full interview on ABC News Live at 8:30 p.m. ET.

He said that when he was arrested in Moscow in the summer of 2019, he was a healthy 175-pound student majoring in international security studies. When he was released, he said his weight had dropped to 131 pounds, he was ill, coughing up blood and feared he had contracted tuberculosis.

“He looked terrible. He looked really thin and he had dark circles under his eyes, and he just didn’t look like the Trevor that left for Russia,” Reed’s mother, Paula Reed, told ABC News. “So, that was hard to see him looking that way.”

The 30-year-old Texas native’s ordeal started in 2019 when he was visiting his Russian girlfriend, a recent law graduate, in Moscow. Reed, who had been studying Russian, was coming to the end of his time in the country and attended a party with his girlfriend’s friends, where plied with vodka shots he became drunk.

On the drive home, Reed became unmanageable, according to his girlfriend, Alina Tsybulnik, and jumped out of the car. Unable to get him back in and fearing for his safety, Tsybulnik and her friends said they called the police to ask them to take Reed to a drunk tank to sober up.

Two police officers agreed and after taking Reed to the station told his girlfriend to come pick him up in the morning. Reed, who says the last thing he remembers was being in the park, said when he woke up in the lobby of the police station the next morning initially he was free to leave.

But as he waited for his girlfriend to arrive to pick him up, a shift change occurred and the police brass on the next shift decided to hold him. Then, he said, agents from Russia’s powerful domestic intelligence agency, the Federal Security Service or FSB, arrived and interrogated him.

“I pretty much knew as soon as I saw FSB agents where this case was was headed,” said Reed.

After the agents’ arrival, the police abruptly accused Reed of assaulting the police officers who had taken him the night before, charging him with endangering their lives.

He was arrested on the spot.

Reed was put on trial, in what he described as a “kangaroo court” and which the U.S. embassy denounced as absurd. At a hearing attended by ABC News, the two police officers Reed was alleged to have assaulted struggled to remember the incident and repeatedly contradicted themselves, at one point becoming so confused that the judge laughed at them.

Reed told ABC News that during an interrogation with the two officers, they admitted to him they had been ordered to make the false allegations against him.

“I asked, you know, one of those officers, I said, ‘Why are you guys doing this? Why did you write this, like, false, you know, accusation against me?’ And he looked around at the door to make sure that there was no one there, and he looked at the other police officer, and he said, “We didn’t want to write this. They told us to write this."” Reed said.

Despite believing the trial was predetermined, Reed battled to prove his innocence, repeatedly appealing rulings. He accused Russian authorities of trying to pressure him into dropping his resistance, including, at one point, sending him to a psychiatric treatment facility to “scare me.”

“That was pretty terrible. You know, blood on the walls. There’s a hole in the floor for the toilet,” said Reed, adding that human feces were all over the floor of a cramped cell he shared with four other prisoners, who suffered from serious psychological conditions.

“I thought maybe they had sent me there to chemically disable me, to give me sedatives or whatever and make me unable to fight,” Reed said.

After over a year in a pre-trial detention center that he described as “extremely dirty” and infested with rats, in mid-2020 Reed was convicted and sentenced to nine years in a prison camp. He was transported to a prison in Mordovia, around 300 miles of Moscow, a former Gulag camp built just after World War II.

But there, Reed said he refused to work or kowtow to prison rules.

“Ethically, I thought that would be wrong to work for a government who was kidnapping Americans and using them as political hostages,” Reed said. “I couldn’t justify that with myself.”

As punishment, he said he was placed in solitary confinement for 15-day stretches at a time, sleeping in the cold cell at night on the floor, trying to stay warm by huddling next to a hot-water pipe.

“I mean, it was difficult, but I wasn’t going to let that change my actions,” Reed said.

Reed said that even as the guards in the camp “hated him” for not complying with their orders to work, his resistance attracted the admiration of fellow prisoners.

“I was consistently fighting and resisting the government there,” he said. “The prisoners inside of the Russian prison, the criminal element there, they respected that.”

He said he survived by maintaining his battle for justice while at the same time refusing to allow himself to hope he would ever go home.

Meanwhile, Reed’s parents continued to battle for his freedom. His father, Joey Reed, flew to Russia, spending over a year alone there to be at his son’s court hearings and lobby U.S. diplomats in Moscow. Stateside, he and his wife and daughter mounted an intensive campaign of government leaders on both sides of the political aisle to take up his cause.

Joey and Paula Reed took their fight all the way to the White House, eventually obtaining a meeting with President Biden which they credit as being decisive in persuading his administration to finally make the trade.

“My parents and my girlfriend, Alina, did everything,” Trevor Reed said. “They gave up their whole lives to help me.”

Reed said on the day he was traded, he was loaded onto a plane by 20 FSB agents but told nothing of the destination. But as the plane headed south and he saw he was flying over water, Reed said he realized it must be the Black Sea and he must be headed for Turkey. The aging Russian government plane was so dilapidated though, Reed said, that he feared they might crash before they made it to any swap.

On the tarmac in Turkey, he walked past Yaroshenko, he said.

“I remember looking at him and he looked over at me. I think both of us probably had that same feeling, that same thought of like, ‘that’s what that guy looks like,"” Reed said.

Treated by doctors on the plane back, Reed said he struggled to shake a new found anxiety around flying.

“Mostly I was hoping that the plane did not crash at that moment before I saw my family,” he said.

Wages fight for other hostages

Reed said that when he initially landed in the United States, his parents were there to meet him, but he said he couldn’t hug or touch them until he underwent a full medical examination to ensure he did not have tuberculosis or any other communicable diseases.

Since being medically cleared, he said he has tried to adjust to normal life, even having to remember some English, after speaking Russian for the past three years.

But Reed said he cannot stop thinking about the other former Marine held hostage in Russia, Paul Whelan, who was left behind. Whelan, who was seized in 2018 while attending a wedding in Moscow, is held on espionage charges that the U.S. government says were also fabricated to take him as a bargaining chip. Whelan is in a prison camp also in Mordovia, sentenced to 16 years.

Russia had previously floated trading Whelan for Yaroshenko and other Russians held in the United States and at one time it had been thought Reed and Whelan might be traded as a pair.

“I had a really strong feeling of guilt that I was free and that Paul Whelan was still in prison. I thought when I found out that it was an exchange that was happening, that they had probably exchanged Paul Whelan, as well. And I expected him to be coming home with me. And he — he didn’t,” Reed said.

“I thought that that was wrong, that they got me out and not Paul,” Reed said, choking up. “I knew that as soon as I was able to, that I would fight for him to get out and that I would do everything I could to get him outta there.”

Reed said he also feared for the WNBA star Brittney Griner, who was seized on drugs smuggling charges in February after Russian authorities alleged they had found vape cartridges containing hashish oil in her luggage. The State Department has designated Griner as wrongfully detained.

Russia has also floated the idea of trading the notorious arms dealer Viktor Bout for Whelan and Griner. Bout, nicknamed the “Merchant of Death” is serving a 25-year prison sentence in the United States, convicted on narco-terrorism charges.

Reed said the United States should trade Bout without hesitation to free Whelan and Griner.

“I think that they need to do that. If that’s for Viktor Bout, I don’t care. I don’t care if it’s 100 Victor Bouts. They have to get our guys out,” Reed said.

“You’re getting two Americans who are going to have, you know, a huge amount of time left on their sentences for a guy who is getting out soon — who has already been in prison for 15 years,” he said.

He said if the freedom of the other American hostages means more prisoner exchanges, then the U.S. government shouldn’t balk at taking that path again.

When told that some have countered that prisoner exchanges only encourage countries to take more hostages, Reed scoffed at that notion.

“I would like to say that that’s completely inaccurate,” Reed said. “That’s not a concern at all because countries like Russia, China, Venezuela, Rwanda, Iran, Syria and places like that need absolutely no incentive to kidnap Americans.”